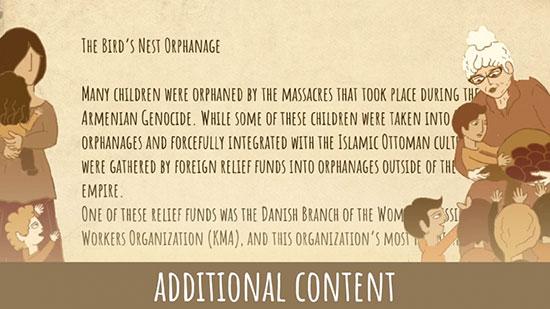 He has based his game on his great-grandmother and his grandfather, the only two survivors from their village during the 1915 Armenian genocide.

“My grandfather was just an infant at the time,” says the 24-year-old. “I thought, why try to speak about the experiences of others when I have my own family history to talk about.”

Mayrig – Paths to Freedom is an interactive story, based on the historical events of the Armenian Genocide. Reports of eyewitnesses were used, but some parts were shortened, changed or added to improve the consistency of the story.

The game tells the story of a young mother and her child escaping from persecution by the soldiers with red flags, suddenly forcing her to leave her home. During her escape, you have to make difficult decisions, leading either to disaster and death or to survival and a new life far from home.

The game has been co-published by Friedrich Naumann Foundation:

Launched on Android, Apple and PC, the free game is available for download in English and Arabic — with plans to soon release an eastern Armenian version.