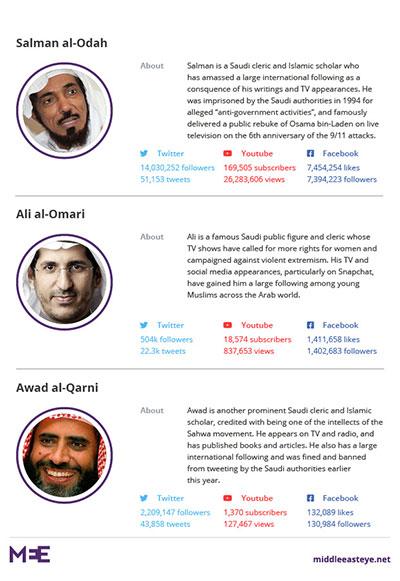 The Saudi crown prince’s executions have been choreographed with Trump’s political fortunes. Will the US president stop them?

Reuters reported at the time that all three were outside the state-backed clerical establishment and recorded Odah’s past period of imprisonment two decades earlier for having tried to set up a Muslim Brotherhood inspired Sahwa (Awakening) movement.

It was hardly front page news.

A month later, Crown Prince Mohammed bin Salman told The Guardian he was going to return the Kingdom to “moderate Islam”, and asked for “global support to transform the hardline kingdom into an open society that empowers citizens and lures investors”.

The Guardian swallowed this baloney hook, line, and sinker – as did many investors queuing up to be invited to the second edition of the conference dubbed “Davos in the Desert.”

“The crown prince’s comments are the most emphatic he has made during a six-month reform programme that has tabled cultural reforms and economic incentives unimaginable during recent decades, during which the kingdom has been accused of promoting a brand of Islam that underwrote extremism,” the paper commented.

This nod and a wink reporting continued all the way through the mass arrests which were to follow that year, starting when the Ritz Carlton was turned into a detention centre in November that same year.

When the driving ban on women was lifted in June 2018, it was confirmation of what the world wanted to see. No need to see what was happening to the women activists themselves who were – and still are – in prison.

Salman al-Odah was held for a year before he was formally charged with 37 counts of terrorism.

The person who first drew my attention to the nature of these charges and what they revealed about the regime that was making them was Jamal Khashoggi.

Odah’s trial was one of the last things he talked about to a group of friends in London on the Saturday before he walked into the Saudi Consulate in Istanbul three days later. “You have to explain to the world how ridiculous these charges are,” Khashoggi said, almost pleadingly.

Khashoggi was right to be outraged at what had been said openly by the public prosecutor.

He revealed that it is a crime punishable by death in the crown prince’s new, reformist, forward-looking Saudi Arabia to “expose injustices towards prisoners”, or to express “cynicism and sarcasm about the government’s achievements”.

Khashoggi’s murder blew bin Salman’s cover, particularly in Washington, but did not stop attempts to paint the crown prince as a good man surrounded by bad advisers.

One of these myth-making exercises was a story that the crown prince had been stripped, albeit temporarily, of some of his authority by his father, and that he had not attended a series of high profile ministerial and diplomatic meetings in Riyadh.

This runs counter to persistent reports of King Salman’s failing cognitive mental capacity from people who have either tried to talk to him or heard his conversation, though it is important to note here that the evidence is mixed.

Even where there is a script for him to follow, as there was in the important summit between the Arab League and the European Union at Sharm el-Sheikh in Egypt held in February this year, the king stumbles badly.

From the word go, MBS set about the task of fashioning a one-man state, and selected the people he had to get rid of before he could achieve it

The balance of probability is that the father is as much a “house guest’’ of his son as the rest of the royal family are. Public displays of dissent are few and far between.

The reality is that ever since he was made crown prince in June 2017 and took control of the security forces, intelligence services and all three of Saudi Arabia’s armies, Mohammed bin Salman has been in total control of the Kingdom, micro-managing everything that happens, not least to its dissidents.

From the word go, MBS set about the task of fashioning  a one-man state, and selected the people he had to get rid of before he could achieve it.

It has taken two long years for the rest of the world to wake up to the crown prince’s project for absolute power in the world’s most significant absolute monarchy.

If it were, the likes of Odah, who has challenged literal interpretations of Sharia and said that while wrong, homosexuality should not be punished, would not be sitting on death row in prison (even though the sentence has yet to be passed).

He would be at the crown prince’s side as an advisor.

The religious conservative establishment in Saudi has always been split, between the official Wahhabi establishment that demands blind, unquestioning allegiance to the King and independent scholars who question this, in the name of Islam.

Bin Salman has been leaving the official establishment virtually untouched, while rubbing out the very thinkers challenging the conservative status quo.

That is why the three Muslim scholars were so important and in the first wave of arrests, and why despite all the Western outrage over Khashoggi, bin Salman appears determined to execute them.

As independents and moderates, they are more threatening to bin Salman’s project to install himself as absolute ruler than his other political detainees are. Their popularity on the internet, where their followers are counted in the tens of millions, is testament to the threat they pose.

An avid opponent of political Islam, bin Salman is no shrinking violet when it comes to using Islam politically. A few months before the arrest, he chose the time and the place of his investiture as crown prince carefully.

The venue for this piece of political theatre was Mecca, but the night on which it happened was even more important.

The 21st of June 2017 was the 27th night of Ramadan, known as Laylat-al-Qadr – The Night of Destiny. It is the night the Quran was first revealed to Muhammad, the Prophet. It’s the holiest night in the Islamic calendar, more powerful to worshippers than “a thousand months”.

It’s not for nothing that bin Salman chose that night when he would officially receive the oath of allegiance. Bin Salman abuses the Islamic calendar as readily as any US evangelist does the Christian one.

Who can stop the execution?

If bin Salman is, and always has been, in total control, who then could stop these executions from taking place? Not the father, or his advisors. Not the rest of the the cowering royal clan, who are more concerned about their wallets than they are their own country.

Nor can the people of Saudi Arabia do anything to protect the three men they were so keen to watch on television. There is no European leader who could stop the executions. Nor could the US State Department, which condemned Odah’s trial in its annual report on human rights.

There is only one man that bin Salman will listen to, and that is Donald Trump

There is only one man that bin Salman will listen to, and that is Donald Trump.

Bin Salman’s execution spree is carefully choreographed with Trump’s political fortunes. Bin Salman waited until the release in March this year of the report by Special Counsel Robert Mueller into Russian interference in the presidential election before going ahead with the mass execution of 37 mainly Shia activists.

The calculation from Riyadh was that once the political pressure was removed from the Trump presidency, Trump would be freer to support his real allies in the Middle East. Even when the heat was on the US president, he held the Saudi line with Khashoggi, indicating that the US would not punish the kingdom over the killing. And so it has proved ever since.

The execution of the 37 was in itself a trial balloon, I was told by two Saudi government sources, and again Trump performed as he was expected to.

She said: “Any further executions of political dissidents is a direct consequence of the Trump administration’s enabling environment, and its repeated, public vice-signaling: no matter what heinous abuse you commit against your people, we’ve got your back.”

Liberal America, or indeed Europe, will not be the only places facing the consequences of a second term of Trump as president, which is alas the current betting in Washington.

Trump’s second term will be paid in blood all over the Middle East, but not least in the executions of political dissidents in Saudi Arabia, the UAE and Egypt. However despotically they behave, Trump will continue to provide them with impunity for their actions.

There are some in government in Riyadh who are desperately hoping for bin Salman to revoke the decision they say has already been made to convict and execute the three scholars just after Ramadan. Will wiser counsel prevail? It has not in past.

David Hearst is the editor in chief of Middle East Eye. He left The Guardian as its chief foreign leader writer. In a career spanning 29 years, he covered the Brighton bomb, the miner’s strike, the loyalist backlash in the wake of the Anglo-Irish Agreement in Northern Ireland, the first conflicts in the breakup of the former Yugoslavia in Slovenia and Croatia, the end of the Soviet Union, Chechnya, and the bushfire wars that accompanied it. He charted Boris Yeltsin’s moral and physical decline and the conditions which created the rise of Putin. After Ireland, he was appointed Europe correspondent for Guardian Europe, then joined the Moscow bureau in 1992, before becoming bureau chief in 1994. He left Russia in 1997 to join the foreign desk, became European editor and then associate foreign editor. He joined The Guardian from The Scotsman, where he worked as education correspondent.