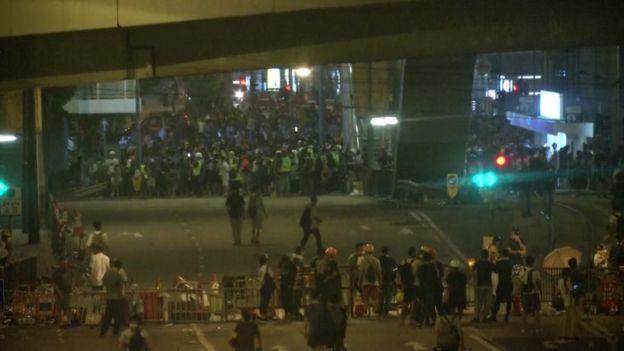 Police have fired rubber bullets and tear gas in Hong Kong at demonstrators amid anger at a new bill to allow extradition to mainland China.

They are concerned the new laws could target political opponents of Beijing, and fear human rights abuses in China’s legal system.

“The rioting actions that damage peaceful society, ignoring law and discipline is unacceptable for any civilised societies,” she said in a video statement.

Officials say 72 people aged between 15 and 66 have been injured so far, with two men in a critical condition.

The government is still backing the bill and it is expected to pass its final vote on 20 June.

It has promised legally binding human rights safeguards and other measures it says should alleviate concerns.

The rallies against the extradition bill are the biggest since the territory was handed back to China by the British in 1997.

How have the protests unfolded?

Protests had been largely peaceful ahead of the scheduled debate of the bill – but on Wednesday they escalated as activists tried to storm government buildings.

One young protester wearing a black mask and gloves told news agency AFP that they would not leave until “they scrap the law”.

Rights groups including Amnesty have accused police of using excessive force, but Police Commissioner Stephen Lo Wai-chung said police had had “no choice”.

As night fell, protesters remained in some streets behind makeshift barricades.

Meanwhile a Chinese foreign ministry spokesman has described reports that security forces from the mainland could be sent to Hong Kong as “fake news”.

Geng Shuang said such reports were “rumours to fool people so as to create panic”.

Police said they were also investigating death threats made against Ms Lam.

In a tearful interview with local TV, Ms Lam dismissed accusations that she had “sold out” Hong Kong.

“I have grown up here with all the Hong Kong people,” she said. “My love for this place has led me to make many personal sacrifices.”

There has been very limited media coverage of events in Hong Kong on the mainland. Search results are either blank or toe the Beijing line.

“This kind of violent demonstration is not supposed to happen in Hong Kong, a developed society,” said Global Times Editor Hu Xijin on Twitter, which is blocked in China

“I don’t think Westerners that encourage protests in Hong Kong want the best for the city. They would rather see disturbance there.”

However Chinese citizens are not completely unaware of what is happening across the border.

Some mainlanders were seen protesting in Hong Kong over the weekend, and others have shown their solidarity on the Wechat social media platform.

“Although this is Hong Kongers’ fight, the love for freedom and dignity is universal,” wrote one user. “I salute their struggle and effort. I just hope that we are not going to see a bloody crackdown.”

What is in the extradition bill?

It allows for extradition requests from authorities in mainland China, Taiwan and Macau for suspects accused of serious criminal wrongdoing such as murder and rape. The requests would then be decided on a case-by-case basis.

The move came after a 19-year-old Hong Kong man allegedly murdered his 20-year-old pregnant girlfriend while they were holidaying in Taiwan together in February last year.

The man fled to Hong Kong and could not be extradited to Taiwan because the two do not have an extradition treaty.

Hong Kong officials have said courts in the territory will have the final say over whether to grant extradition requests, and suspects accused of political and religious crimes will not be extradited.

The government has also promised to only hand over fugitives for offences carrying a maximum sentence of at least seven years.

Hong Kong has entered into extradition agreements with 20 countries, including the UK and the US.

China has expressed “firm support” for the bill but many Western nations have criticised it.

How widespread is the opposition?

A wide range of groups have spoken out against extradition to China, and hundreds of petitions are in circulation.

More than 100 businesses have said they will shut to allow their staff to protest and nearly 4,000 teachers said they would strike.

Powerful business lobbies say they fear the plans will damage Hong Kong’s competitiveness as a base of operations.

On Sunday organisers said more than a million people took to the streets demanding the government abandon the amendments, though police estimated turnout was 240,000 at its peak.

In 2014 tens of thousands protested against restrictions on who they could vote for as chief executive.

Despite being mostly peaceful, the protests failed to achieve any concessions. Some of the organisers have since been jailed on public nuisance charges.

What is Hong Kong’s relationship with China?

Hong Kong was a British colony from 1841 until sovereignty was returned to China in 1997.

Under the “one country, two systems” principle, Hong Kong has kept its judicial independence, its own legislature, its economic system and the Hong Kong dollar.

Its residents were also granted protection of certain human rights and freedoms, including freedom of speech and assembly.

Beijing retains control of foreign and defence affairs, and visas or permits are required for travel between Hong Kong and the mainland.