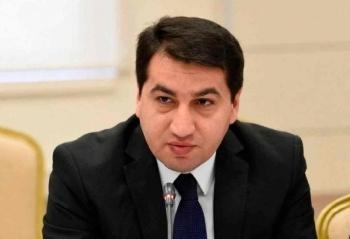 Azerbaijan pursues an independent foreign policy, Hikmet Hajiyev, Head of the Department of Foreign Policy Affairs of the Azerbaijani Presidential Administration, said during an event dedicated to Azerbaijan’s foreign policy held at the Atlantic Council in Washington, DC, USA on June 11, Trend reports.

During the event, Hajiyev noted that Azerbaijan’s foreign policy is based on several principles, one of them being the principle of multivectoralism.

“Azerbaijan’s geopolitical realities dictate that Azerbaijan should have a multivectoral foreign policy, first of all with its neighbors, as well as Central Asian countries across the Caspian Sea, with whom Azerbaijan manages to build a constructive dialogue and effective cooperation,” he said.

According to him, this principle prioritizes relations with immediate neighbors for Azerbaijan, and Azerbaijan also manages to maintain good relations with the US, the EU, China and other partners.

Hajiyev went on to say that one of the cornerstones of the country’s foreign policy is the guarantee of mutual respect and non-interference in internal affairs, as well as the establishment of a mutually beneficial cooperation.

Hajiyev also touched on the importance of multiculturalism in Azerbaijan, where people of different backgrounds and faiths have coexisted for centuries.

“Azerbaijan also promotes these values at the international level, and we strongly support dialogue of civilizations,” he noted.

During the event, a conversation was held with Hikmet Hajiyev, moderated by former US Ambassador to Azerbaijan Richard Morningstar.