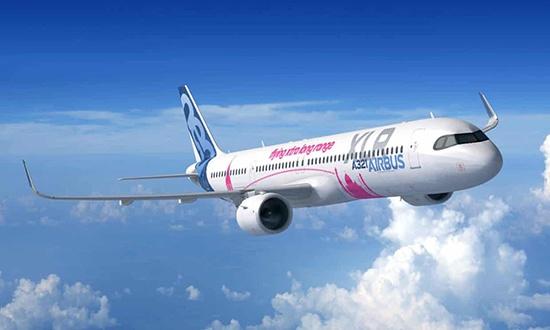 Airbus has stepped up the pressure on arch-rival Boeing on the opening day of the Paris airshow by launching a new long-range small passenger jet and announcing $15bn (£12bn) worth of orders.

The European manufacturer unveiled the A321XLR, a long-haul version of the A321neo that competes with Boeing’s grounded 737 Max.

Airbus said on Monday that the plane’s additional range, which opens up routes such as India to Europe or China to Australia, would allow airlines to operate a single-aisle aircraft on intercontinental journeys that are currently possible only on larger, less fuel-efficient wide-body planes.

It is expected to confirm up to 200 orders for the new model, the A321XLR, at the show this week, according to Reuters. Middle East Airlines, the Lebanese flag carrier, was announced as launch customer, with an order for four A321XLRs, which are expected to be operational from 2023. The California-based Air Lease Corporation also signed a letter of intent to purchase 27 of the new planes – as well as 50 A220-300s and 23 additional A321neos, worth a total of $11bn at list prices.

Boeing, meanwhile, expressed further contrition over the 737 Max, which remains grounded in the wake of the Ethiopian Airlines and Lion Air disasters. The two crashes, suspected to be caused by faulty software and sensors, killed a total of 346 passengers and crew.

Kevin McAllister, the chief executive of Boeing’s commercial aircraft, said: “We are very sorry for the loss of lives.” He also apologised for the disruption to airlines from the subsequent removal of service of the 737 Max. He did not predict when the model would fly again, but said it was “a pivotal moment” for Boeing: “It’s a time to be introspective. And it’s a time for us to make sure accidents like this never happen again.”

The firm suffered a fresh setback as its engine supplier, GE Aviation, announced a delay because of problems with a part in the GE9X engine that it is developing for a new Boeing plane. The 777X will be the world’s largest twin-engined passenger jet when it takes to the skies later this year.

Expectations for the Paris show, which usually features a plethora of new products and big-money orders, had been dampened by economic headwinds, including the US-China trading salvoes and concerns over sluggish growth.

However, Airbus followed up the Air Lease deal with news that Virgin Atlantic would buy 14 of its A330neo widebody planes in an order valued at $4.1bn (£3.3bn). Virgin said the planes, with Rolls-Royce engines, would be 13% more fuel-efficient than the aircraft they replaced and also significantly quieter on take-off and landing.

The airline’s chief executive, Shai Weiss, said the deal would “play a pivotal role in our fleet transformation”, adding: “Twenty-nineteen marks a return to growth for Virgin Atlantic as we strive to become the most loved travel company and the nation’s second flag carrier at an expanded Heathrow.”

Optimism over airlines’ prospects was in shorter supply elsewhere after another overnight profit warning from German giant Lufthansa. Shares in Lufthansa, which cut its forecast profit for 2019 by 20% in the face of intense fare competition, fell 10%, and European rivals were also dragged down, with easyJet and the British Airways owner, IAG, also falling on the FTSE 100.