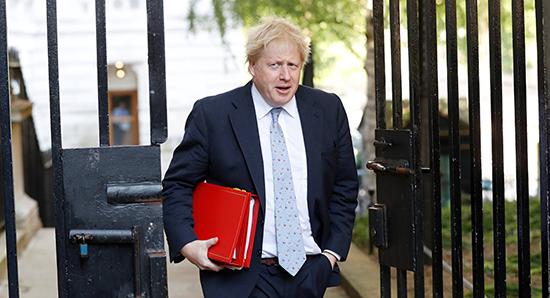 AFP -The six Conservatives vying to become Britain’s prime minister face off in the second round of voting on Tuesday, with the final pair to be decided by the end of the week.

All of the party’s 313 MPs can take part in the secret ballot in the contest to replace outgoing leader Theresa May, with further rounds scheduled to whittle the list down to a final two, who will face the party’s 160,000 grassroots members.

Boris Johnson, the former foreign minister and leading Brexit campaigner, ran away with the first round of voting last week, winning the support of 114 MPs — more than twice the number of votes won by his nearest challengers.

The outcome of the leadership battle could determine under what conditions Britain leaves the European Union. It is currently scheduled to leave on October 31.

Johnson has said he is open to leaving the EU on October 31 without a formal deal between London and Brussels but would prefer to secure one by the deadline.

Opponents of “no-deal” say it would cause economic chaos as Britain breaks up with its top trading partner.

Any candidate failing to win the support of at least 33 MPs on Tuesday will be eliminated, with the worst performing contender dropping out if they all reach the threshold.

Two hours later, the remaining candidates will then do battle in a BBC televised debate, following a first TV showdown on Sunday that Johnson skipped.

Another round of voting is scheduled for Wednesday and two more for Thursday, if required, to get the numbers down to a final two.

Then party members will pick the winner in a postal ballot with the victor set to be announced in the week starting on July 22.

There are 50 votes to play for that went to four contenders who have now dropped out.

Unconventional outsider Stewart has won praise for his performance in Sunday’s Channel 4 debate and for his strong campaign on social media, reaching out to centre-ground voters from different parties.

Stewart warned Monday that Johnson “doesn’t, as far as I can see, have a plan,” to deal with Brexit.

The 90-minute debate on Channel 4 featured the five remaining candidates and an empty podium for Johnson.

In sometimes ill-tempered exchanges, four of the five candidates said they would seek to renegotiate the draft Brexit divorce deal agreed with Brussels even though EU leaders have repeatedly ruled this out.

But Stewart said he would press ahead with the current agreement even though it has been rejected by parliament three times this year in a process that has forced Prime Minister May to call time on her leadership.

He repeatedly challenged the others to detail their own Brexit plans and accused them of “machismo”.

Hunt, who supported staying in the EU during the 2016 referendum campaign but now backs Brexit, also struck a conciliatory tone.

The four candidates without Stewart said they would be willing to lead Britain out of the European Union without a divorce deal on October 31 — the current deadline set by the EU.

Johnson has also said Brexit must happen on that date, “deal or no deal”.

Raab, who resigned as Brexit secretary in protest at the government’s compromises with Brussels, went further than the others in not ruling out suspending parliament to stop MPs from blocking a no-deal Brexit.

“I’m the only candidate committed to leaving by the end of October come what may,” Raab said.

Gove, responded saying: “I will not take Britain out of the European Union against the will of parliament.”

Johnson has come under fire from his rivals for giving few interviews and public appearances, but will appear in Tuesday’s debate.