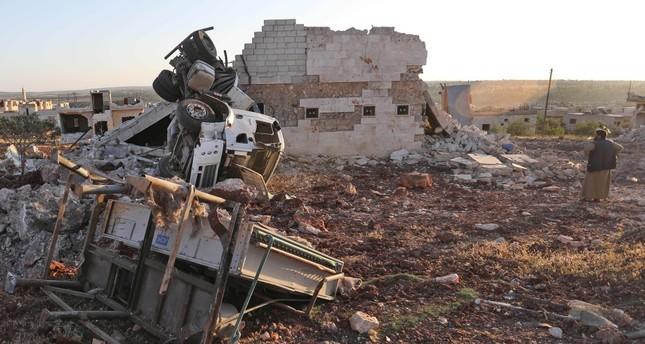 Despite a ceasefire, Russian and Syrian forces are continuing to carry out daily airstrikes on Idlib province in northwestern Syria. The main targets are often civilian facilities

Idlib is the last refuge for many Syrians. Around 3 million people live here. Hundreds of thousands more Syrians are trapped on the country’s border with Turkey in the nearby town of Atmeh.

Since the end of April, the Syrian military has led an offensive to expel the rebels from Idlib. Russia, a close ally of President Bashar Assad’s regime, announced a new ceasefire in the region last week. But the offensives from Russian airplanes and Syrian government supporters continued.

According to the UK-based Syrian Observatory for Human Rights, Syrian fighter planes made 42 air raids in the rebel-controlled enclave. One of them is said to have hit a Turkish army observation facility.

Sophie Bischoff from the Adopt a Revolution initiative fears that the situation is going to escalate in the province: “Even though developments on the ground directly affect us in Europe, there is a prevailing perception that everything has gone back to normal again in Syria. The conflict doesn’t really interest anyone.”

Bischoff believes that the way in which it is slowly falling out of the news cycle has something to do with the dynamics of the war, which has been going on for eight years.

Adopt a Revolution was founded in 2011 to make the voices of Syrian activists heard around the world and to support civilians on the ground. The organization is currently working with some 20 initiatives in Syria, most of which are located in Idlib. Many of the civil society partners were forced to flee because of the air raids.

Two of Germany’s largest relief organizations, Diakonie and Caritas, also share the view that Syria has now become a “forgotten war” and they aim to draw attention to the current plight of the country. In a joint statement, they said the humanitarian situation continues to be one of devastation and that, once again, it is the Syrian people who bear the brunt of the conflict.

According to the UNHCR, more than 270,000 people fled the fighting in Idlib in May alone. The relief organization says that 6 million people continue to live as displaced persons in their own country and almost 12 million people in Syria are still in need of humanitarian aid.

The failure of the demilitarized buffer zone

In the battle for Idlib, civilians find themselves defenseless, caught between fronts: Assad’s troops want to recapture Idlib at any cost while jihadis from Hayat Tahrir al-Sham (HTS) have filled the existing power vacuum. The HTS is a group of extremists that emerged from the Nusra Front front and is the dominant force in Idlib.

“After Russia and Turkey agreed on a demilitarized zone in Idlib, Turkey was responsible for liberating Idlib from HTS. But that didn’t happen and is now being used as an argument to justify the offensive on Idlib,” Bischoff said.

Bischoff believes that Russia and the Assad regime mainly target civilian institutions such as hospitals and schools — and that this is no coincidence. She adds that if Idlib is captured by government forces, people would be forced to leave.

“There are already thousands of displaced people on the Turkish border. What if that number keeps rising? At some point there won’t be any space left,” Bischoff explained.

She believes the people of Idlib would not be safe if the regime regained control. Most would be politically persecuted and therefore try to escape to Turkey and from there move on to somewhere else. In other areas where the regime was able to seize power, there has been an increase in arbitrary arrests.

Moreover, Bischoff points out that there were hardly any structures, such as air-raid shelters, for civilians to protect themselves from the onslaught. “Many flee to fields and try to take refuge under trees. If the situation continues to escalate, it will result in a humanitarian catastrophe that will cost many lives,” she warns.

‘Somebody has to do something’

Bischoff says that so far international efforts to secure peace have failed. “Somebody has to do something,” she said. “More pressure is needed, especially so that Russia does not get more involved. All nations should have an interest in maintaining this last opposition enclave because the people there cannot live under this regime.”

The last United Nations Security Council meeting on Syria was at the end of May. UN Deputy Emergency Relief Coordinator Ursula Müller called for the protection of civilians in the region. In May alone, there were 160 civilian casualties and 25 hospitals were attacked.

“You know that more than half the Syrian population has either fled the country or faced repeated internal displacement…and you know that currently, an estimated 3 million people in Idlib are caught up in the crossfire,” Müller told the Council.

At the round table, it seemed that none of the 15 UN ambassadors listening to Müller could offer an answer that would lead to a solution. Russia spoke of the fight against terrorists in Idlib; Germany of respect for international law.

With this, the fifth session of the UN Security Council on Syria to take place in May drew to a close  — without any step towards the end of the war in Syria.