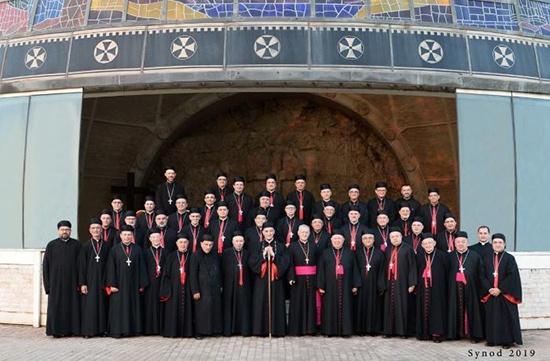 The annual Synod of Bishops ends on this disturbing note, citing “serious warnings” coming from the countries of the region and the diaspora. As a result of the exodus, Aleppo, Damascus, and the Holy Land have lost part of their population. The liturgy is an element of unity among the Maronites. The Patriarchal Auxiliary Boulos Abdel Sater is the new Archbishop of Beirut.

Beirut (AsiaNews) – The annual Synod of the Maronite Church (5-8 June, and 10-15 June) came to a close on Saturday with a serious observation, as noted in the final communiqué, namely that the Middle East, except for the special case of Lebanon, is losing its Christians.

Notwithstanding the caution their work needs, the Maronite bishops cited “serious warnings” coming from the Maronite bishoprics in Syria, Jordan, Holy Land, Egypt and Cyprus, as well as “the growing needs they face, as crises pile up.”

The bottom line is that these countries are losing people and the Synod of Maronite bishops is worried.  As one bishop who requested anonymity put it, “there is no one left in Aleppo, Damascus, or the Holy Land”.

In Aleppo, for example, barely ten per cent of the pre-war Christian population of 400,000 still lives there following the outbreak of the Syrian war in 2013. Still, the bishops are not giving up.

In their statement, the prelates insist that they will defend the cause of these people forced to flee by war, insecurity, economic need or ideological pressure, before Arab and international authorities, so that they can “preserve their cultural identity, and that their countries may find again their place in the Arab and international community”.

Was hope mentioned? Indeed, it was. Of course, the bishops are sincere in their pleading; yet, they nonetheless realise that the exodus of Christian populations in the Middle East is, to a certain extent, irreversible, and that this has generated a phenomenon of connected vessels. As the East empties, the outflow is filling the countries of emigration.

The Synod has acknowledged the problem. In its final communiqué, it claims to have examined “the situation of the diaspora bishoprics, as well as their numerical increase and their pastoral needs, especially in terms of priests”.

According to the statement, the bishops looked at the dioceses of France, West and Central Africa, the communities in South Africa, Western Europe and Northern Europe, as well as Central America, Colombia, Peru and Ecuador. The dioceses of Lebanon, the main Maronite reservoir for priests, have been asked to give “priority” to the training of missionary priests “and help financially the expanding communities in need”.

Turning to the Maronite Church’s liturgical reform, the Synod highlighted the importance of the liturgy as a unifying factor for Maronites. They devoted special attention, for its unifying role, to the programme used in the four seminaries for the priesthood: Ghazir, Karm Saddé, Washington and Rome. Special emphasis has been placed on “accompaniment” at all stages of priestly training so as to keep out candidates who are incompatible with the mission of the Church.

In addition, the Synod also paid special attention to the Maronite religious courts and the pastoral care of marriage, hoping to move towards full-time judges and priestly training specialised in canon law. It also welcomed the positive results of the efforts of recent years towards developing outreach facilities centred on listening, reconciliation, accompaniment and preparation for marriage.

The Synod also discussed the presence of Syrian refugees in Lebanon, their number and geographical distribution. To this end, the Bishops heard a detailed report prepared by the Maronite Foundation in the world.

The social upheavals that have affected Lebanon in recent years were not neglected, including the problems of Catholic schools (which teach 70 per cent of students in Lebanon), which were negatively affected by a law that increased salaries (46/2017) to the point that some were forced to close.

The Synod did not fail to encourage Lebanese government to resume the home loan programme, which was halted as a result of the central bank’s weakened leading capacities. For the Synod, denying a future to young couples is tantamount to pushing them to leave and accentuating the human exodus from the country.

Lastly, the bishops urge political leaders to create a climate of confidence in the country, and preserve the spirit of coexistence and “balance” within the state apparatus.

With respect to elections, the Patriarchal Vicar and Auxiliary Boulos Abdel Sater was elected Archbishop of Beirut, replacing Bishop Boulos Matar. The new archbishop was himself replaced by Fr Antoine Aoukar, a senior official with the Antonine Maronite Order.

The Patriarchal Vicar and Auxiliary Youhanna Rafgic Warcha, was appointed representative of the Patriarchate to the Holy See and president of the Maronite College, in lieu Bishop François Eid, who reached the age of retirement. Within the patriarchal curia, he is replaced by Chorbishop Peter Karam, who is responsible for the Maronite bishopric of Notre-Dame du Liban, in Los Angeles.