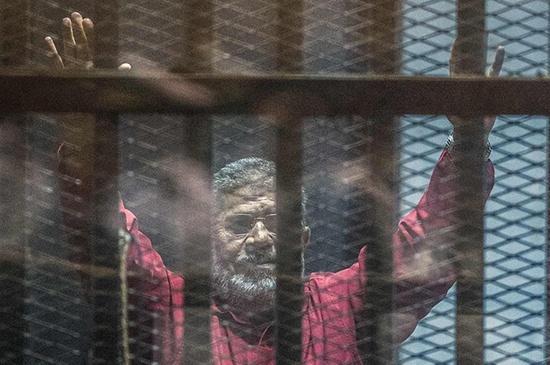 Egypt’s former president overthrown by a military coup, Mohammed Morsi, was buried under heavy security early on June 18, amid strong reactions from Turkey.

Morsi’s family attended funeral prayers in the mosque of Cairo’s Tora prison, followed by the burial at a cemetery in the Egyptian capital’s eastern district of Nasr City, said Abdul-Moneim Abdel-Maqsoud, a member of Morsi’s defense team.

Morsi’s son Ahmed said security agencies refused to allow Morsi to be buried at the family’s cemetery in his hometown in Sharqia province.

She said the ex-president was prepared for burial at Tora prison’s hospital in southern Cairo and the funeral prayer took place at the mosque of the same prison.

“Only his family was allowed to attend the funeral prayer and was buried in the graveyard of Muslim Brotherhood leaders in Nasr City [in eastern Cairo],” she said.

The Turkish Foreign Ministry said in a statement that Morsi will be remembered as “an exceptional person in his country’s struggle for democracy.”

Turkey’s Religious Affairs Directorate (Diyanet) said funeral prayers in absentia were held in mosques across the country on June 18 for Morsi.

After only one year in office, however, he was ousted and imprisoned in a bloody military coup led by Egypt’s then defense minister and current president Abdel Fattah el-Sisi.

“We received with deep sorrow the news of the sudden death of former President Mohamed Morsi.”

Malaysia said it was looking forward to a thorough report from the Egyptian government on the cause of Morsi’s death.

The Tunisian Ennahda Movement said it had received the news with great sadness and shock and extended condolences to Morsi’s family and the Egyptian people.

Jordan’s Muslim Brotherhood held “the coup authorities in Egypt responsible for Morsi’s death after his detention for seven years in solitary imprisonment”.

Palestinian group Hamas mourned Morsi and hailed his efforts in serving the Palestinian cause.

The group also held the international community responsible for “the crimes of the coup” in Egypt.

Calls for a probe

Egypt’s public prosecutor Nabil Sadek said on June 17 that the 67-year-old leader collapsed in the defendants’ cage and was immediately rushed to the hospital, where he was pronounced dead.

The country’s state television reported early Tuesday that Morsi was “suffering from a benign tumor, had continuous medical attention and his death was caused by a heart attack”.

The death of Egypt’s first and only democratically-elected president was to be expected given his treatment by authorities, a leading rights group said on June 17.

Egypt’s state information service said that a court had approved Morsi’s request in November 2017 asking that he be “treated at his own expense.”

British Conservative MP Crispin Blunt, who headed the Detention Review Panel for Mohamed Morsi in 2018, said that Morsi was “not an ordinary prisoner” and his death is representative of the Egyptian government’s “inability to uphold prisoners’ rights.”

The senior parliamentarian made clear that the government of Egypt has a duty to explain the death of the former president and should be held accountable for the treatment given to him while in custody. Blunt also called for an investigation into the cause of Morsi’s death.