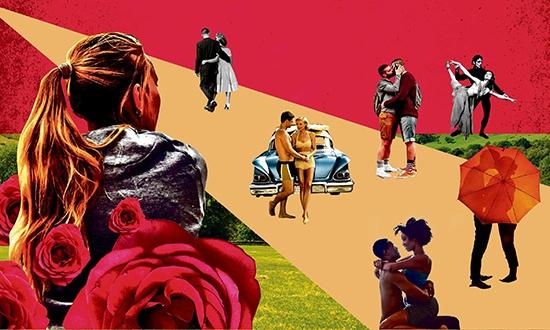 In these open-minded times, one taboo has held steady: never having had sex at all. Four thirtysomething virgins explain how they deal with the stigma

Some say they avoid town centres in order to not be faced with happy couples. Illustration: Guardian Design/ Getty Images

Richard’s colleagues call him their work therapist. He’s empathetic and a good listener, he says – “so a lot of people tell me about their personal shit”, including the people he works with at his retail management job in the south-eastern US. But when they complain to him about their sex lives, or he sees happy couples hand-in-hand in the shop, “I think: ‘That’s not something that’s going to happen for me.’” At 31, Richard is a virgin.

If it seems as though taboos about sex have lifted in these ostensibly open-minded times, there is one that holds steady: the stigma over never having had sex. While it has become widely unacceptable to criticise someone for having too many partners, being a virgin “still seems to be something that can be only mocked or shamed or suspect”, says Richard.

It may be that later-in-life virginity is dismissed as a problem with an easy fix. Cath Mercer, a principal investigator on the Natsal survey of sexual attitudes and lifestyles in Britain, says the vast majority (95%) of the general population report have made their “sexual debut” – as she rather grandly puts it – by age 25. And the most recent data available, from 2010-12, suggests that just 2.2% of British men and 1.1% of women were virgins at the age of 30.

Yet there are many reasons that a thirty or fortysomething might never have had sex, says Libby, a 37-year-old Canadian. “It could be tied to mental health issues, ranging from low self-esteem and social anxiety to serious depression. It could be due to a childhood of abuse, or physical health issues like cerebral palsy, or a religious upbringing, or even lack of comprehensive sex education.”

Libby connects her virginity to her personality traits (“cynical, private, loud, opinionated and chubby – though my friends would say I’m being too hard on myself”) and her 10-year struggle with depression and anxiety. “When I was sick, I could barely get out of bed, let alone put myself out there to potential partners.”

When she was well, she found that medication – for her mental health, and oral contraceptives to mitigate her very painful periods – wiped out her libido. “And if you don’t have the drive, sex isn’t something you pursue,” says Libby. “I don’t blame drugs entirely – as I said, I never put much effort into dating and sex – but I do think they play a large part in my story.”

Richard also identifies poor mental health as a factor in his virginity. He is now on antidepressants and – following substance abuse in his 20s – sober. He guesses that his religious upbringing – where sex was not discussed beyond “Don’t do it” – was also influential. But, maybe counterintuitively, he says the reason he has not had sex is that, to him, it’s not just about sex. “If that was all I wanted to accomplish, I would’ve just gone out and got it over with a long time ago.” He has had “a handful” of chances to lose his virginity, but drunken opportunities at parties when he was younger “just didn’t feel right”, and his subsequent sobriety put an end to those.

Dating apps are no solution – for him or many others. As Libby puts it: “If someone is still a virgin after 30, they likely have some issues tied to it, none of which will be solved with a swipe to the right and a random hookup.”

Although Richard describes himself as introverted and afraid of intimacy and rejection, he says the reason he struggles to approach strangers cold is “not because I’m desperate – it’s because I’m not that desperate”. He is articulate, even wryly humorous, about his virginity, even as he says it causes him day-to-day unhappiness. “It’s like trying to date with an STD that’s not contagious and easily curable, but still puts people off.”

Although he desires a relationship more than sex, he says that at a certain point his status can become self-perpetuating. “At my age, it becomes a red flag for people. I don’t really have interpersonal romantic experience, not even just on a physical level, but on an emotional level, too.”

He rejects the stereotype that lack of sexual experience extends to life experience (in the style of Steve Carrell’s naive 40-Year-Old Virgin). “I’ve been through a lot, even for a regular person.” Nor is he a “mopey neckbeard or, even worse, incel” – the group of overwhelmingly misogynistic men who blame women for their poor sex lives.

A few years ago, Richard went to see a sex therapist, but never returned. “He asked me – and this will always stick in my head – ‘Why don’t you just pay someone if you want to have sex?’ “I said: ‘Well, I want someone to want me, I want to want them, I want us to want to do this.’ He got really indignant. ‘It’s just sex – you need to get over yourself.’”

The thing is, says Richard, “you don’t know who’s going to judge you for it or who won’t. There’s no way to tell.”

The therapist spent the rest of the hour practising a mindfulness technique, says Richard. “‘Like, ‘Tell me what you think of yourself with regards to relationships – what would you be without this thought?’ I thought: ‘I wouldn’t be in your office right now, paying you $200.’”

Three years ago Richard was pursued by a woman who retreated after learning, via a game of 20 questions over text, that he was a virgin. “When I kind of pried, she said that she thought that she would ‘ruin’ me.” That response is not uncommon, he says. “It’s like they’re dictating your sexuality for you, in a way – what you are and aren’t ready for, what you can handle emotionally, just based on that one titbit about you.”

Julia, from Los Angeles, also comes up against preconceptions. At 31 going on 32, she is an evangelical Christian and still a virgin, as is her boyfriend. People in secular circles are surprised to learn they have never had sex – “My boyfriend’s business partner wondered if he’s secretly gay since we’re not doing it” – but then so are some Christians. These days, she says, most young evangelicals have premarital sex (or rush into marriage). “I was actually surprised that my boyfriend is a virgin – that’s how common it is.”

It is not easy staying chaste, Julia says – “we have to be proactively careful about that”, particularly when they are travelling together – but their church community keeps them accountable. “And I have a very full and rich life as a virgin.”

That said, she and her boyfriend are seriously discussing marriage; she’s already warned him that they are going to “have sex every day, seven days a week” (although the novelty may wear off, she concedes). “I’m excited to have sex with my future husband. What we lack in experience, we’ll learn together.”

But, Julia agrees, as a virgin by choice she is an anomaly. For others the hurdles can seem insurmountable.

Jim, a 35-year-old from East Sussex, has never been kissed. He had few friends in secondary school, where his confidence was shot by bullying, and his social circle has dwindled since then. Like Richard, he is sober, thereby missing out on pubs and clubs – “the main route for kids in the 90s to have gotten together with someone”. He works in IT, a male-dominated industry, and although he has some hobbies (archery, rock-climbing) he feels women there aren’t open to being approached, if he even knew how. “You don’t want to seem unwelcome or forceful.”

Holding him back, he says, are absence of opportunity, his looks (he describes himself as in shape but balding, and “just not nice-looking”), his shyness and his lack of self-confidence – which worsens with each passing year.

He has never told anyone that he is a virgin. “It’s not something that has come up. If it did, I would probably lie and say that I had sex when I was 16 or 18 but that I haven’t had it in ages. It’s never having been in a relationship that bothers me more.” For that reason, he says, he decided against going to a sex worker when he considered it a few years ago. “I got to thinking that if I paid for it, that would probably make me feel even more worthless.”

Sex, as he sees it, is a destination, but he is more interested in the journey. “It’s the getting a girlfriend, a partner – going to places with someone, who you can talk about your day with, and they’ll be listening. ‘Virgin’ is the easiest tag to apply, but there’s more to it than that. It’s an experience that’s been missing from me, and from other people.”

It bothers him more some days than it does others, he says – but the number of times he has avoided a town centre because of not wanting to see couples is “worryingly high”. Richard says something similar. “When I meet someone or see someone I find attractive, instead of feeling a little spark, there’s just a feeling in the pit in my stomach that says: ‘Nothing’s ever going to happen.’”

Libby, however, is feeling good about the future. Over the past few years her health has improved, allowing her to invest in her work, home, family and friendships. At New Year’s, she realised that her only regret about the years she had spent unwell was her lack of dating and sexual experience. She changed medication “and it seems to be the right cocktail. I’m feeling better than I have in a long time and, as an unexpected bonus, my libido woke up.”

She has since signed up for two online dating sites and had more good experiences than bad. Until very recently, only her two closest friends knew she was a virgin. “Now that I’m dating, I find myself telling potential interests fairly early on,” she says. “It’s a great way to weed out undesirable guys.” She hopes her future partners will be patient, open to teaching, and willing to go at her pace.

All names have been changed.