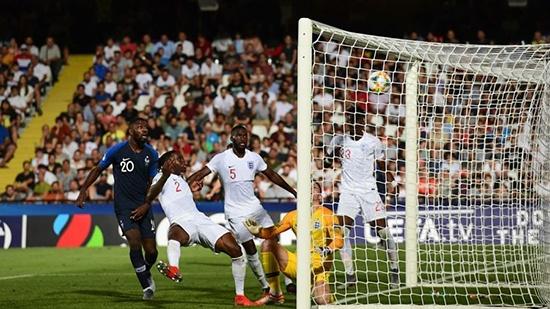 The Crystal Palace defender sliced into his own net to break the Young Lions’ hearts with a 2-1 Group C defeat in Cesena.

Phil Foden’s superb run and finish early in the second half opened the scoring but, after Hamza Choudhury was sent off, Jonathan Ikone struck an 89th-minute leveller before Wan-Bissaka turned the ball past Dean Henderson.

The goalkeeper had saved Moussa Dembele’s first-half penalty and Houssem Aouar then hit the post with his 66th-minute spot kick after Choudhury was dismissed for an awful tackle on Jonathan Bamba.

Boss Aidy Boothroyd had described his squad as soldiers and artists and the Young Lions almost added the substance to Foden’s style in a battling second-half display.

Watched by senior boss Gareth Southgate and his assistant Steve Holland the Young Lions showed no early nerves and James Maddison’s whipped free-kick was palmed away from Paul Bernardoni.

Boothroyd’s side were calm and sharp in possession with Choudhury keeping them ticking over in the middle.

Slick England pinned France in their own half and almost opened the scoring after 14 minutes.

Foden split France’s defence to find Ryan Sessegnon and his low cross was turned onto the post by Ibrahima Konta.

Three minutes later Dominic Solanke steered Demarai Gray’s centre wide but despite England’s dominance they survived a major scare when Henderson bailed them with a fine penalty save after 25 minutes.

Jake Clarke-Salter was penalised after handling in the box following Jeff Reine-Adelaide’s knockdown but Henderson flung himself to his left to palm away Dembele’s spot kick.

England quickly regained their composure and carved out another fine chance when Gray’s touch took him past Fode Ballo-Toure but hit the side netting with just Bernardoni to beat.

France had gained a foothold, though, and Henderson needed to beat out Dembele’s drive after Wan-Bissaka’s mistake 10 minutes before the break.

Lille’s Ikone twice went close and Gray’s end product again let him down when he drove over from the edge of the box after escaping Lucas Tousart.

Lyon’s Dembele, France’s biggest threat, fired wide soon after the re-start, but England went ahead thanks to Foden’s wonderful strike after 54 minutes.

The midfielder collected the ball 40 yards out and slalomed passed three challenges, displaying brilliant close control, before rolling into the corner from 16 yards.

The Young Lions thought they had a second six minutes later only for Sessegnon’s tap in to be ruled out for offside.

And a thrilling game took another twist when Choudhury conceded another penalty and was dismissed for a horror tackle on Bamba, who was carried off.

It was a reckless and unnecessary challenge from the Leicester midfielder – who was initially given a yellow card but was sent off after a VAR review.

But England were again let off the hook when Aouar’s 66th minute spot kick hit the post.

Yet the Young Lions failed to hold on after France’s constant pressure and conceded two late goals.

First Ikone found the bottom corner in the 89th minute and then Wan-Bissaka turned into his own net after Jean-Philippe Mateta’s flick in fifth minute of stoppage time.