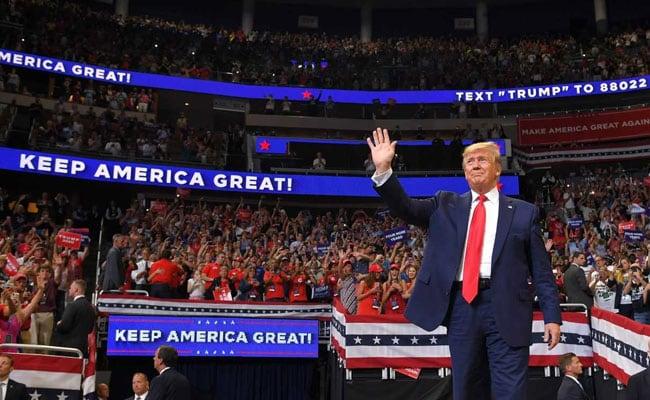 Even if dismal early poll numbers show he faces a difficult race, Trump goes into the reelection fight buoyed by a strong economy and confidence in the fierce loyalty of his right-wing base.

US President Donald Trump launched his 2020 reelection campaign Tuesday, whipping up a crowd of at least 20,000 with a nationalist boast about the US economy being the “envy” of the world and warning that opposition Democrats want to “destroy” the country.

Promising the packed arena in Orlando, Florida an “earthquake at the ballot box,” Trump said: “We did it once and we’re going to do it again — and this time we’re going to finish the job.”

“Our economy is the envy of the world,” boomed the US leader, who is betting that strong job growth will help persuade the country to give him a second term.

“We are going to keep America great again,” Trump told the crowd. “Oh we will keep it so great. Better than ever before.

“And that is why tonight I stand before you to officially launch my campaign for a second term as president of the United States.”

The Republican then turned on the Democrats, accusing them of seeking to “rip your country apart.”

Even if dismal early poll numbers show he faces a difficult race, Trump goes into the reelection fight buoyed by soaring GDP, low unemployment, and confidence in the fierce loyalty of his right-wing base.

Trump — himself accused by opponents of wide-ranging corruption — told the crowd that together they had formed “a great political movement” that had “stared down a broken and corrupt political establishment.”

Supporters lined Orlando’s downtown sidewalks all day, waiting in tents and chairs overnight to be the first in the door.

“This is a historic event, we would not miss this for anything,” one fan, David Meloney, told AFP.

Florida will be one of the key swing states in 2020 if Trump is to defeat the nominee chosen from a field of 23 Democratic hopefuls.

And ahead of the rally, he pushed several of the core issues in his populist, nationalist platform.

In a tweet early Tuesday, he attacked the European Union for what he says is currency manipulation making it “unfairly easier” for the US ally when it comes to trade.

Another of his biggest focuses was illegal immigration.

This is a theme he has hammered repeatedly during his presidency and he is ramping this up further with an announcement Tuesday on Twitter that he wants the deportation of “millions of illegal aliens.”

“They’re going to start next week,” he told journalists just before the Florida rally, responding to reports that his tweet had taken his own immigration authorities by surprise.

After more than two drama-filled years at the White House, the fast-talking real estate salesman bets that the economy and his message on immigration will persuade Republicans and enough centrist blue collar workers to vote him in again.

But there’s no question that a lengthy probe into Trump’s murky dealings with Russia and his divisive, bruising style have left him wounded.

A wide range of polls show Trump lagging far behind Democratic frontrunner Joe Biden, who is campaigning on a promise to return the country to what he portrays as the calmer, gentler days of Barack Obama, under whom he served as vice president.

A Quinnipiac University poll released Tuesday showed Biden leading Trump 50-41 percent in Florida, while Senator Bernie Sanders is up 48-42 percent over the president in the state.

Polls so far in advance have limited value and in 2016 they famously failed to predict Trump’s defeat of Democrat Hillary Clinton. If anything, the surveys point to another bitterly fought, tight race.

But in a sign of frayed nerves, Trump has lashed out at what he calls “fake” polling, while multiple US media reports say that his campaign has fired several of its own pollsters.