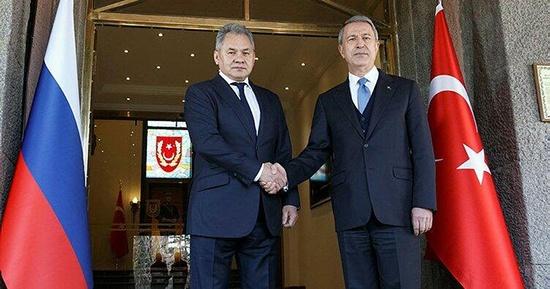 Turkish and Russian defense ministers exchanged views on June 17 in a telephone call on measures needed to ensure peace, stability and a cease-fire in Syria.

Hulusi Akar and Sergey Shoygu stressed commitments to the Astana and Sochi peace deals, the Turkish Defense Ministry said in a statement.

In September 2018, Turkey and Russia agreed to turn Idlib into a de-militarized zone after a meeting between Turkish President Recep Tayyip Erdoğan and his counterpart Vladimir Putin in Russia‘s coastal city of Sochi.

Ankara and Moscow signed a memorandum of understanding calling for the stabilization of the situation in Idlib’s de-escalation zone, in which acts of aggression are prohibited.

Syria has been locked in a vicious civil war since early 2011, when the Bashar al-Assad regime cracked down on pro-democracy protests with unexpected ferocity.

Since then, hundreds of thousands of people have been killed and more than 10 million others displaced, according to U.N. officials.