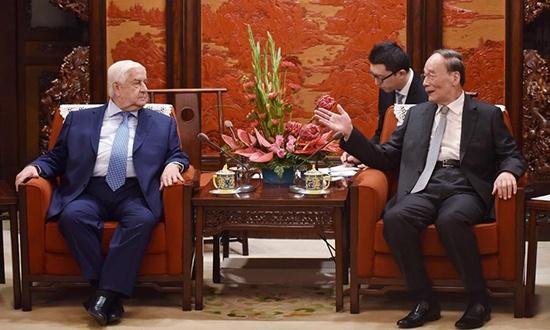 With key wartime allies Iran and Russia broke, Syria is looking to China and its Belt & Road Initiative for economic salvation

“China may be the biggest winner of all if Assad takes over Syria.” This was the headline of an article published in Newsweek in January 2018 – a prophecy turned reality in 2019. Syrian Foreign Minister Walid al-Moallem is in Beijing on a six-day visit, aimed at discussing counterterrorism, economics, and reconstruction.

This is certainly not Moallem’s first visit to China since the outbreak of his country’s civil war in 2011, having visited twice: in 2012 and 2015. It is his first, however, since allied Russian troops swept through the Syrian battlefield four years ago, re-taking nearly all territory previously held by the Turkish-backed armed opposition, and creating favorable conditions – for the first time in years – to sit down and discuss proper economic re-engagement between Damascus and Beijing.

“The objective of Walid al-Moallem’s visit is to push China into greater engagement in Syria’s reconstruction,” said Amer Elias, a Damascus-based political analyst and member of the ruling Baath Party.

“The broad objective is economic, but it cannot move forward without a political push,” he told Asia Times.

As Moallem landed in the Chinese capital on Sunday, a symbolic gift arrived from China: 200 public transportation buses unloaded from containers.

Officials from both countries have given plenty of lip service to China’s role in Syria’s reconstruction, but very little has happened due to ongoing political instability.

In 2017, Beijing hosted the “First Trade Fair on Syrian Reconstruction Projects” where it said it would contribute $2 billion. Months later, it delivered 800 electric power generators to the Syrian port city of Latakia and promised to rebuild the country’s telecommunications by 2020. It also sent 200 leading companies, mostly state-owned, to attend the 60th Damascus International Fair in September of last year.

But to date, none of those initiatives have materialized into major investments.

The estimated cost of Syria’s reconstruction varies, with numbers anywhere from $200-400 billion.

The Europeans have made clear they will not pitch in unless a UN-mandated political transition is commenced and nor, of course, will the Americans.

The Gulf appeared poised for economic re-engagement last December, when the UAE and Bahrain – close allies of Saudi Arabia – re-opened their embassies in Damascus. But Saudi never followed, and Gulf airlines never returned, suggesting that Washington had quashed the prospect.

In China, Moallem hopes to jumpstart a 2017 agreement with Beijing, which calls for the establishment of a special zone for Chinese companies wanting to do business in Syria.

If implemented, it would be part of the ambitious Belt and Road Initiative, which aims to rebuild China’s historic trade routes, including links to the Middle East and beyond.

The special zone would be established in the coastal city of Latakia, complementing a similar project that the Chinese are working on in the port of Tripoli in Lebanon, just over the southern border.

The Syrians are also eyeing a $23 billion aid package that China promised to deliver to the Arab region last July – hoping that the lion’s share will go to the rebuilding of destroyed Syrian oil wells, power stations, and hospitals.

The project has yet to materialize due to persistent violence in neighboring Idlib province, and specifically the city of Jisr al-Shughour, which overlooks the Syrian coast and is controlled by the armed opposition group.

In Idlib, members of China’s own Uighur minority are fighting under the flag of the Turkistan Islamic Party, which is affiliated with ISIS. A Syrian diplomatic source told Asia Times that the Chinese regularly provide their Syrian counterparts with battle coordinates of these fighters, asking that they are either killed on the battlefield or arrested and extradited back to China.

Another unresolved dispute is for territory presently held by the US-backed Kurdish forces east of the Euphrates River. That is where Syrian oilfields are situated; fields in which the Chinese have high stakes.

Piece of the pie

The message of Moallem in Beijing appears to be that while a war is still raging in Idlib and friction remains high in Kurdish-held towns in the northeast, now is the time for China to venture more aggressively into the Syrian market if it plans to compete with Iran and Russia.

Tehran and Moscow, key allies of Damascus during the conflict, have already secured key contracts. Russia recently secured a 50-year contract for phosphate extraction in Syria, while the Iranians are working to obtain a license to bring an Iranian GSM operator into Syria, as well as to administer the port of Latakia.

Closer to home, China’s neighbor India has begun revisiting a bundle of development projects that have been on hold since 2011, including the completion of a steel plant in the central city of Hama.

The agreement gives China partial ownership of all oil revenue in eastern Syria. The Syrians are offering to send oil from recently liberated refineries to China in exchange for loans from the Chinese government. Furthermore, those banking transactions would be carried out in yuan, instead of euros or US dollars.

The Chinese firm cannot return to work in Syria, however, since the oil fields it was mandated to drill – Sheikh Mansour, Rimelan, and Tishreen – are all located in territory presently held by the Americans and their Kurdish allies in Syria’s northeast.

In February 2016, China sent delegations to meet with Kurdish officials currently running the fields, seeking to survey its equipment and discuss their security and future. Beijing’s demands for the return of its assets were rejected by the Kurds, giving it more reason to seek a speedy solution to the Syrian-Kurdish standoff east of the Euphrates.

Once back under government control, the Chinese would have to rebuild much of the destroyed infrastructure, which has been left unmaintained for years, but would also gain back their investment.