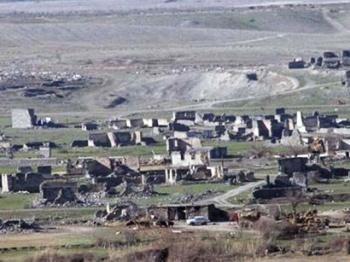 The April 2016 battles have shown that the Armenian army is in a deplorable state, head of the department of the Azerbaijani Defense Ministry Rauf Damirov told Trend on June 20.

“During the exchange of the bodies of soldiers killed during the battles, the Armenians dragged the bodies of their soldiers on the ground. We were shocked because those soldiers were fighting on the side of Armenia,” he said.

“While transferring the bodies of the killed Azerbaijani pilots, the bodies were raised to the shoulder level and carried away to the car,” he said. “The Armenians were shocked.”

Damirov stressed that the Armenian government is resorting to the provocations on the line of contact to hide the chaos reigning in the country.

“The ceasefire regime has been recently violated more often,” he said. “The Azerbaijani army every time gives the Armenian army a worthy response. The Armenians understand that the Azerbaijani army surpasses their army greatly from the point of view of moral and psychological preparation.”

The 1994 ceasefire agreement was followed by peace negotiations. Armenia has not yet implemented four UN Security Council resolutions on withdrawal of its armed forces from Nagorno Karabakh and the surrounding districts.