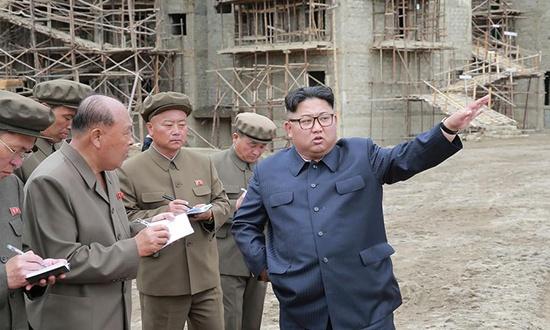 There’s a persistent view that we can keep the nuclear-armed and warlike North Koreans from unleashing havoc by switching  them to productive economic activity. You hear it all the time from Donald Trump.

Someone else who proffers this bromide is Kim Jin-hyang, chairman of the South Korean organization that sent southern businesses to set up in the the Kaesong industrial zone,  just above the border. The zone has been closed since 2016 due to sanctions. He’s trying to get it reopened and lure American businesses in to join the Koreans.

The moment American firms set up in the zone, the Korean Broadcasting System quoted the South Korean as having told a Los Angeles news conference last week, war will be a thing of the past.

In fact, though, the way North Korea’s family regime looks at it, serious economic activity is war. Normal construction workers can’t raise buildings and other structures at the breakneck speed that policy dictates. That requires soldiers and “shock brigades” –  bands of dragooned, hapless civilians sent in to toil and suffer and, in some cases, die – like ancient Egyptian pyramid builders.

Currently the best place to see that belief in action is Samjiyon (Three Lakes) County, a resort area near the sacred volcano Mount Paektu and the Chinese border. A massive modernization project there has received close coverage by the Seoul-based news agency DailyNK, which interviews North Koreans by phone and employs undercover correspondents in the North.

“The ‘shock teams’ and ordinary citizens working on that project are living in shacks,” one source told DailyNK. “There are just so many people there that the authorities haven’t been able to organize enough accommodation.”

A worker’s day starts at 4 am with no break until five hours later, when a small breakfast of a mixture of flour and corn is served at the construction site. Lunchtime, including a brief rest, is from noon to 1:30 pm. After that it’s keep on working until dinner, which isn’t until 9 pm, regardless of hunger pangs – and then work some more until midnight or 1 am.

“Members of shock brigades who run away from their jobs face up to two months in a forced labor camp,” another source told DailyNK. “The conditions at the construction site are so bad, however, that some workers joke sarcastically that forced labor camp conditions are better.”

What’s the hurry with this project? Answer: Orders from on high. Dictator Kim Jong Un instructed last October that construction be completed in time for next year’s 75th anniversary of the founding of the ruling Workers’ Party.

What’s amazing in view of North Koreans’ usual fear-induced obedience is the reaction of a group of plasterers in another county whose local party committee gathered them, placed them on a truck and sent them off to Samjiyon as a shock brigade.

The plasterers wouldn’t have it, a DailyNK source said. They “jumped off the truck.” Ordered to go and work on farms instead, they refused. The publication has yet to report on their ultimate fate.

Meanwhile, on a visit the month after failure of his February Hanoi summit with Trump, Kim Jong Un visited and emphasized the regime’s motto of self-sufficiency. The Samjiyon project “is a fierce class struggle and political struggle against the enemies trying to block our path,” Daily NK quoted him as saying.