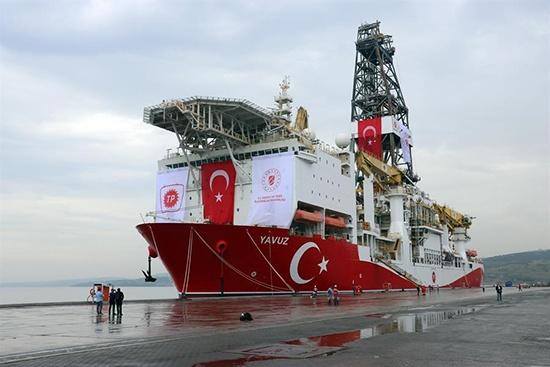 Turkey sent a second drilling vessel, Yavuz, to east Mediterranean Sea on June 20 that will begin hydrocarbon explorations off the coast of the Cyprus Island in early July.

Turkey‘s Energy and Natural Resources Minister Fatih Dönmez said during an official ceremony that the Yavuz vessel will reach a drilling depth of 3,300 meters in Karpaz-1 well, which is located at Bay of Gazimagusa of the Turkish Republic of Northern Cyprus (TRNC) and will finish its operations in three months.

Turkey already has a drilling ship, Fatih, working in the region. Fatih vessel is operating in waters west of Cyprus Island while Yavuz will operate in the east.

“The Greek Cypriot administration does not have a right to take decisions on its own or even have a say in any matter concerning the whole island,” said Dönmez.

Turkey has consistently contested the Greek Cypriot administration’s unilateral drilling in the Eastern Mediterranean, saying Turkish Cypriots also have rights to the resources in the area and Ankara has the right to hydrocarbon drilling as well.

The Turkish-flagged drillship Fatih launched offshore drilling operations on May 3 this year in an area located 75 kilometers (42 nautical miles) off the western coast of Cyprus island.

The area falls entirely within the Turkish continental shelf-registered with the U.N. and under permit licenses, the Turkish government in previous years granted to the Turkish Petroleum Corporation, the country’s national oil company.

Turkey wants to see energy as an incentive for a political resolution on the island and peace in the wider Mediterranean basin rather than a catalyst for further tensions.

“We would also like to warn some non-regional actors who have partnered with the Greek Cypriot administration. Don’t pursue illusions that have no end and cannot achieve any results. Don’t be part of unlawful plans,” Dönmez stressed.

“We were here yesterday. We are here today and we will be here again tomorrow. No power can change this historical truth,” he added.

The minister said that Turkey doesn’t accept any of the efforts of non-regional actors to determine the boundaries of the region by substituting themselves as an international court or decision-making authority.

“We will fully defend the legitimate rights of our country and the TRNC in the Mediterranean. We will continue our drilling activities, which is rooted in our own legitimate rights. Yavuz will show the nation’s determination to the whole world once again,” he said.

He underlined that Turkey always defended the distribution of the riches of Cyprus Island and the Mediterranean in a fair manner.

Yavuz, which has a full-spectrum capability for offshore drilling, came from Malaysia to Turkey in February.

It generates its electricity from diesel fuel generators with a capacity of 42 megawatts and has 7.5 million liters of fuel capacity.

Yavuz, whose construction was completed in 2011, previously worked in different countries, such as in Tanzania, Kenya, Malaysia and the Philippines.