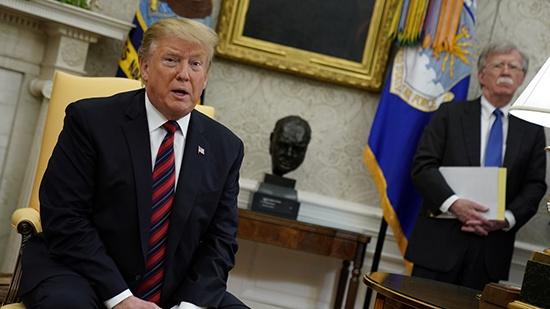 Despite being “cocked and loaded” to launch an assault on Iran, President Donald Trump says that he eventually decided the strike would have been “not proportionate” to the downing of the unmanned US drone.

Accusing the Islamic Republic of shooting down the US surveillance drone over “international waters”, Trump tweeted Friday that he had pulled the plug on an attack 10 minutes before the strike was to take place.

“10 minutes before the strike I stopped it, not proportionate to shooting down an unmanned drone. I am in no hurry, our Military is rebuilt, new, and ready to go, by far the best in the world,” Trump said in a series of tweets. “Sanctions are biting & more added last night.”

….proportionate to shooting down an unmanned drone. I am in no hurry, our Military is rebuilt, new, and ready to go, by far the best in the world. Sanctions are biting & more added last night. Iran can NEVER have Nuclear Weapons, not against the USA, and not against the WORLD!

The called-off attack comes at a time of soaring tensions between Washington and Tehran, with blame for the recent attacks on commercial shipping in the Persian Gulf pinned by the US on the Islamic Republic, coupled with Thursday’s shoot-down of an American spy drone off the coast of Iran.

While the US military argued that the drone was attacked “unprovoked” over international waters, Iranian Foreign Minister Javad Zarif on Thursday provided exact coordinates of the location of the aircraft when it was intercepted by Iran’s air defenses, well within the country’s airspace.

Washington has imposed several new layers of economic sanctions on Iran in recent months, including on the country’s oil and nuclear sectors, part of its so-called “maximum pressure campaign” designed to coerce the country’s leadership to renegotiate the nuclear pact signed between Iran and world powers in 2015.

US President Donald Trump then stepped away from the nuclear deal, known as the JCPOA, last year, though the rest of the deal’s signatories remain within the agreement and Iran has consistently been deemed compliant.