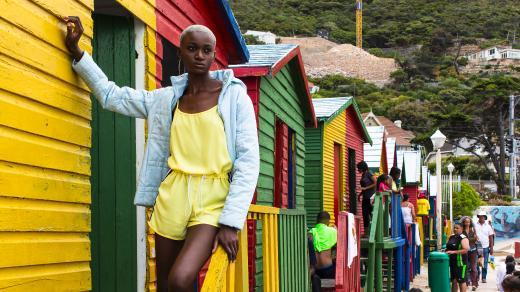 The fashion industry in Africa is on the rise. But for budding models from the continent, the road to success remains long and rocky. Vanessa Kilem is well on her way.

The sky is cloudless, the sea is deep blue and the sand on the beach is white. Vanessa Kilem loves this wide-open landscape and the silence. Nobody bothers her like they do back home in Kinshasa, that cacophonous megalopolis where she grew up and where she can never be alone.

The young woman is sitting in a Cape Town beach café on a balmy evening eating shrimp salad and looking out at Table Bay. Other guests seated at surrounding tables repeatedly glance over at her.

And the reason is clear: It’s hard not to notice Vanessa Kilem. The 26-year-old is extremely pretty, extremely svelte and over six feet (1.84 meters) tall. She is under contract as a model with an agency in Johannesburg and is currently on vacation for the first time in quite a while.

Vanessa has worked almost nonstop since moving to the economic capital of South Africa two years ago. She has taken part in a show by David Tlale, the best-known fashion designer in the country, and she even ended up on the front page of the Sunday Times, a major South African weekly, wearing a dress from MaXhosa Africa. “It’s a dream come true,” she says.

The dream of becoming a model is one that Kilem has had for a long, long time, but for almost as long, it looked as though she would never be able to attain it. She hails from Congo and grew up in poverty. How can a young woman with big dreams but limited opportunities make her way onto the catwalk? “The first time we met it seemed impossible,” she says. A true statement.

Turn back the clock to 2014 — to a humid morning in July in the Masina district of Kinshasa. Kilem was nervous: It was the first day of her crash course in modelling, ahead of Kinshasa Fashion Week.

She had been discovered four weeks earlier during a casting event for which 2,000 people had applied. Kilem was ultimately among the 30 young women who were chosen to present the latest collections by designers from Africa, Europe and America — here in the capital city of a country plagued by violence, disease and poverty.

The Democratic Republic of Congo has been in crisis for more than 20 years. The first Congo War broke out in 1996, ultimately resulting in the overthrow of the despot Mobutu Sese Seko, and it was followed by two additional conflicts, violence that cost the lives of 4 million people. Even today, numerous militias continue fighting in the Kivu provinces and the majority of the 72 million Congolese live in poverty. Congo has been near the bottom of the United Nations’ Human Development Index for years.

Back in 2014, Kilem lived in a small, dilapidated house with a cousin and her mother, who ran a small beverage operation. The kigelia tree outside was surrounded by engine parts and the surrounding wall was topped with shards of glass to ward off thieves.

‘I Want Out of My Narrow World’

The mosquito net over the mattress in her tight, windowless sleeping quarters was full of holes. Pictures of saints covered the walls with a makeshift make-up table positioned between piles of clothes, shoes, wigs and plastic flowers. “I want out of my narrow world,” the 21-year-old said at the time. Kinshasa Fashion Week is the only professional fashion show in the country and Kilem knew that she wouldn’t be getting such an opportunity again any time soon.

The show took place in the upscale neighborhood of Gombe — in the Shark Club, a swanky recreation center with a swimming pool and fitness studio said to belong to the president’s brother. Guests were served champagne and the televisions were tuned to Fashion TV.

Kinshasa Fashion Week is one of the newest such events in Africa. Across the entire continent, around 30 fashion shows are held each year, in cities like Johannesburg, Cape Town, Dar es Salaam, Dakar, Lagos, Accra and Kampala. There is also a fashion show on the island of Zanzibar, in South Africa’s largest township of Soweto and even in Zimbabwe, a country chronically beset by crisis.

The fashion boom is an indicator for the upswing in Africa, with many countries experiencing growth rates they haven’t seen in decades. The middle class is growing, purchasing power is on the rise and more and more Africans can afford fashionable clothing.

Suzy Menkes, one of the most influential fashion critics in the world, believes that Africa’s fashion industry has a bright future ahead of it. For the last several years, the continent’s best designers have been showing their collections in London, Milan and Paris — a broad mix of styles including pan-Africanism, Afrofuturism and wild combinations of a variety of influences.

The Senegalese designer Oumou Sy has been celebrated as the “Lagerfeld of Africa,” while Shunnoz & Tekasala of Angola use fashion as an instrument to challenge the West’s post-colonial dominance and pursue cultural emancipation.

Other African labels have long since established a global reputation, such as Maki Oh, the premium brand of Nigerian designer Amaka Osakwe. She now sells her haute couture in New York boutiques and counts such luminaries as Beyoncé, Rihanna and Michelle Obama among her clients. New York! “I would like to get there too one day,” says Vanessa Kilem. But the city is impossibly far away from the venue in Kinshasa. For now.

She has, however, managed to make her way to South Africa. “This is my springboard to America or Europe,” Kilem hopes. She’s sitting in front of an ice cream parlor in Hout Bay, a suburb of Cape Town, eating a cone of vanilla. Sometimes, she seems slightly unsure of herself when talking about her future. After all, she is already relatively old — for a model.

But then she finds her courage again and thinks back to where it all began. In the Shark Club in Kinshasa.

The girls did their best to appear relaxed, but they still seemed tense. It was as if they were all thinking to themselves: Just don’t make a mistake, don’t throw away your one chance. Still, they had already come a long way. Many of them, like Kilem, had grown up in poverty and the hopes of their families were resting on their shoulders.

When things finally got underway, the catwalk was lined with cabinet ministers and their wives, business luminaries, underworld kingpins and the city’s beautiful and rich. Backstage, the models grew even more nervous. Since early that afternoon, beauticians had been working on them, applying make-up, artificial eyelashes and skin-lightening cream. Hair stylists stretched their tight curls with steaming irons and piled their hair up like bird nests. “Torture,” says Kilem.

For all of them, the black supermodels Iman and Waris Dirie were their role models and they wanted to follow in their footsteps to the catwalks of Milan, Paris and New York — and onto the covers of Vogue and Marie Claire. They wanted to experience the glamour — and then return home one day after achieving wealth and fame.

But the beauty ideal is, as ever, white and Western, with far less work available to those with dark skin. Indeed, Naomi Campbell, the first black supermodel, joined forces with Iman in 2013 to combat discrimination in the fashion industry and founded the Diversity Coalition. Campbell said at the time that top designers often shunned black models completely or opted to include just one in their shows.

“I am so proud of our girls. They were fantastic,” gushed Kahindo Mateene. “They could hold their own in any fashion show in the world.” The spotlights over the catwalk had been turned off and she was sitting on the edge of the swimming pool smoking a cigarette, exhausted and satisfied. With good reason: Her designs had received the loudest applause during the evening show.

Kahindo Mateene, a 40-year-old businesswoman and fashion designer, is from Goma in eastern Congo but speaks English with the broad accent of the American Midwest. In 2009, she founded the fashion label Modahnik in Chicago, renaming it Kahindo in 2016 when she moved to New York.

Despite the progress that has been made, the road to global recognition for African fashion designers remains a long one with numerous hurdles, Mateene says. Few designers make it into the department stores in the fashion metropolises and the haute couture market is already oversaturated as it is. Furthermore, many designers come from countries where there is a lack of training programs and proficient personnel and their success is dependent on the prosperous upper classes, Mateene explains. Even more challenging, she adds, is the fact that China is flooding the continent with cheap imitations of popular labels.

On top of all that, hardly any fabric is actually produced in Africa itself, with the market having been dominated since colonial times by the Dutch company Vlisco. Since the 19th century, the company has been creating the wax-print patterns and colors worn across the continent and taken to be typically African. “We have to overcome the monopoly of Vlisco,” says Mateene.

She welcomes the United Nations’ Ethical Fashion Initiative, which supports the industrial production of clothing in developing countries. The project has created many new jobs in Africa, particularly for marginalized women. Top fashion designer Vivian Westwood, for example, has some of her label’s luxury items produced in Kenya.

But that, too, is consistent with the traditionally paternalistic approach, Mateene says. “Trade, not aid. This continent has the potential to develop itself, in the fashion industry as well.” Her company is something of a pioneer in the field: She has invented a new method for digitally printing fabrics and has created her own style, which she calls “cross culture.” Chicago and Congo, African and Western.

For her patterns, she takes inspiration from painting and architecture, such as from the avantgarde star architect Zaha Hadid. She wants to get away from exotic kitsch, the ethno-look of Afro-folklore with its crocodile leather, zebra prints, leopard patterns and palm fronds. “We are Afropolitan, citizens of the world with African roots,” Mateene says. “That should also be reflected in our fashion.”

Afropolitan, a fashion ambassador for her country: That is also what Vanessa Kilem wants to be. She looks out from a viewpoint down to Hout Bay and talks about her first appearance in Cape Town. “I was pretty nervous. But then I remembered the advice that an experienced model had given me: ‘Always think of your own beauty.'”

After Kinshasa Fashion Week back in 2014, Kilem went to work — improving her French, learning English and studying marketing at a private university. And hoped that an agency would call.

But none did. She sent out email after email to agencies in South Africa, filled out emigration applications and paid exorbitant fees — but was denied a visa anyway. Finally, though, after a detour through the mining town of Lubumbashi in southern Congo, she somehow managed to find her way to Johannesburg.

Once there, she took advantage of the contacts she had made during Kinshasa Fashion Week and ultimately signed on with a small agency. As a beginner, though, it’s not easy for her. Her employer doesn’t pay much, Kilem says, and she sometimes feels like a slave.

But she sees South Africa as just a steppingstone on the way to a brighter future. “The sky is the limit,” she says, as she watches the kite surfers flying over the breaking waves in Table Bay. For her, that sky has a name: America. Or Europe.