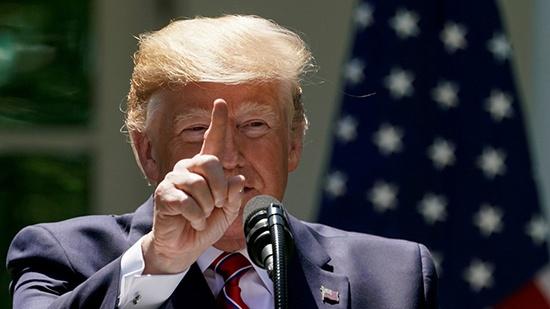 By John Cassidy- The New Yorker

On Tuesday night, in Orlando, Donald Trump formally launched his 2020 reëlection effort with another big rally. After what happened in 2016, it behooves political analysts and commentators to approach the upcoming campaign with caution. So, I will put it no more strongly than this: with sixteen and a half months to go, the President and his campaign staff have reasons to be concerned.

The good news for Trump is that he retains a solid base of support, and the demographic to which he has the strongest appeal—white Americans who don’t have a college degree—still represents a very big chunk of the electorate. Plus, the unemployment rate is just 3.5 per cent, and most Americans are optimistic about the economy. The bad news for the Trump campaign is that other demographic groups seem to have turned even more heavily against him, and a strong economy has failed to lift his approval ratings. Moreover, recent polls suggest that he is in trouble in a number of battleground states, including the three that were key to his victory last time: Michigan, Pennsylvania, and Wisconsin.

You probably don’t need reminding that, thanks to the vagaries of the American political system, Trump won with just 46.1 per cent of the national vote, and a favorability rating that was considerably lower. On November 7, 2016, the day before the election, 37.5 per cent of American voters had a favorable opinion of him, according to the Real Clear Politics poll average, which suggests that either the polls were wrong or large numbers of people voted for him despite not particularly liking him. After his victory, his favorability rating rose to the low forties during the transition, where it has largely stayed. The latest R.C.P. poll average showed him with a favorability rating of 43.8 per cent, which is pretty close to his latest job-approval rating—44.3 per cent on Wednesday. It doesn’t seem to matter what he does or says: these numbers don’t change much.

Among whites without a college degree, according to the network exit poll, Trump defeated Hillary Clinton by more than two to one—sixty-six per cent to twenty-nine per cent. This slice of the electorate represents Trump’s heartland, and according to the exit poll it accounted for about a third of all voters in 2016. (Thirty-four per cent, to be precise.) However, some political experts believe that estimate is too low. In a 2017 study that drew on actual voter files, national-opinion surveys, and their own post-election polling, John Halpin and Ruy Teixeira, of the Center for American Progress, and Rob Griffin, a political scientist at George Washington University, concluded that forty-five per cent of the voters in 2016 were whites without a college degree—eleven percentage points more than the figure from the exit poll.

The more there are of this type of voter, the better Trump’s chances. So what about 2020? Ongoing demographic changes are steadily making the country more diverse. But, in a 2018 analysis, Griffin, Teixeira, and William H. Frey, a demographer at the Brookings Institution, estimated that next year whites without college degrees will make up forty-four per cent of the electorate—just slightly less than in 2016. If this analysis is correct, non-college whites will still be the biggest single voting bloc on the basis of race and education. Plus, they are spread out across the country. The “concentration of Democratic support in metropolitan areas diffuses over-all demographic advantages and increases the chances that large turnout and support from Trump’s base, primarily white noncollege-educated voters in more rural and working class states, can once again lead to a narrow victory” in the Electoral College, Halpin and Teixeira noted.

But if Trump has a potential pathway back to the White House, he also has some very big obstacles in his way, beginning with the fact that, even if white non-college voters did make up forty-four per cent of the 2020 electorate, and he got two-thirds of their support again, it would leave him at roughly thirty per cent of the over-all vote. To win, he also has to attract the support of other groups, such as whites with college degrees, Independents, and Latinos. But the message of the 2018 midterms, and of recent opinion polls, is that many people in these groups have had their fill of him and want him gone. Outside of his base, he’s just not popular. And that is putting it mildly.

For example, according to the latest Fox News Poll, Trump’s approval rating among self-described Independents is thirty per cent, among self-described “moderates” it is thirty-two per cent, and among suburban women it is thirty-three per cent. The poll also provided direct evidence that people in these groups are unwilling to overlook Trump’s character flaws. In response to the question “Do you think a politician can have low moral and ethical standards and still be a good leader?” sixty-five per cent of Independents said no, as did sixty-two per cent of moderates and sixty-six per cent of suburban women.

Another problem for Trump is that, at least according to the polls, the strong economy doesn’t seem to be benefitting him very much politically. As he arrived in Florida, a Quinnipiac University poll indicated that fifty-four per cent of Floridians think that they are better off than they were in 2016, and only twenty-three per cent think they are worse off. But the same poll showed that fifty-one per cent of Floridians disapprove of the job Trump is doing, and just forty-four per cent approve.

Perhaps voters understand that the economy was already growing steadily when Trump took office, and they don’t give him much credit for subsequent developments. But there is also widespread skepticism about his economic policies, particularly the highly regressive 2017 tax bill and the tariffs on goods from China and other countries. In the Fox News poll, thirty-three per cent of respondents said that they believe tariffs help the economy, versus forty-five per cent who said that tariffs hurt the economy. In another question, the pollsters also asked people to say whether Trump’s economic policies benefit everyone, no one, or just certain groups. Thirty-one per cent of respondents said that the policies benefit everyone; forty-eight per cent said that they benefit people “with more money.”

Interestingly, the (correct) belief that Trump’s policies are targeted at helping the well-to-do is widespread among his core demographic. Thirty-two per cent of whites without a college degree said that his policies benefit everyone; forty-four per cent said they benefitted people with more money. On the basis of these polls, it seems like Trump’s tax bill didn’t even fool his base.

The other challenge facing Trump is the electoral map. At this early stage, he is lagging behind the Democratic frontrunners in some of the states he could not win without, such as Florida, Pennsylvania, and Wisconsin. Public polls have been showing this trend for months, and last week it emerged that the Trump campaign’s own polls have found the same thing. According to ABC News, internal polls showed Joe Biden leading the President by fifty-five per cent to thirty-nine per cent in Pennsylvania, and by fifty-one per cent to forty-one per cent in Wisconsin.

Over the weekend, the Trump campaign dismissed these polls, which were taken in March, as out of date, and fired several of its pollsters. “The president’s new polling is extraordinary and his numbers have never been better,” Brad Parscale, the campaign chairman, said in a statement. Trump also weighed in. “Our polls show us leading in all 17 Swing States,” he said on Twitter. And yet, hours after he posted this tweet, the Quinnipiac poll of Florida showed that, in head-to-head matches, he would trail Joe Biden by nine points, trail Bernie Sanders by six points, and trail Elizabeth Warren by four points.

A degree of skepticism is in order. Historically, head-to-head polls taken this early haven’t had much, if any, predictive value in Presidential elections, an analysis at Five-Thirty-Eight pointed out. It certainly seems likely that Trump’s numbers in the battleground states will improve as we get closer to the election: practically nobody in the political world expects a Democrat to carry Florida by nine percentage points. But how much movement will there be? With opinions about Trump already so firmly set on all sides, it isn’t certain that prior experience will provide much of a guide to this election.

Indeed, nothing is certain, except that there is a very long way to go, and that the election will be bitterly fought. Buckle up.