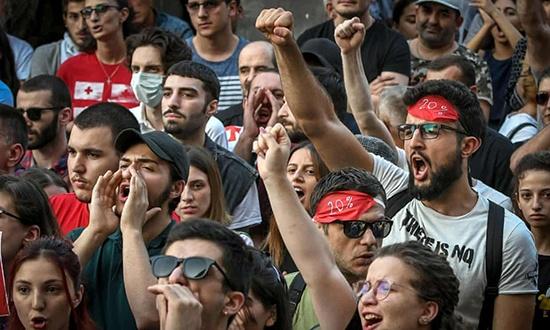 Shaun Walker in Tbilisi – The Guardian

Protesters during a rally in front of the parliament building in Tbilisi on Friday. Photograph: Vano Shlamov/AFP/Getty Images

Protesters gathered outside Georgia’s parliament for a second successive night of protests on Friday evening, demanding snap elections and the resignation of the country’s interior minister.

Clashes with police the previous night left more than 200 people injured and caused the parliamentary speaker to resign.

The protests were prompted by a Russian MP addressing the Georgian parliament from the speaker’s seat, during an assembly of legislators from Orthodox Christian countries being held in Tbilisi.

Also on Friday, organisers of Georgia’s first LGBT pride march, which had been planned for Saturday and threatened by religious and right-wing groups, called off the march, citing security concerns.

Thousands of protesters spent several hours trying to storm parliament in the early hours of Friday, with some attacking the thick cordon of police outside the building in central Tbilisi. Police fired teargas canisters into the crowd at regular intervals, sending people fleeing to adjacent streets, only to return. Later, officers used rubber bullets and water cannon. Ambulances ferried injured police and protesters to hospital, with reports of some protesters losing their sight.

The Georgian president, Salome Zourabichvili, cut short a trip to Belarus to return to Tbilisi, where she visited some of the injured in hospital. She said she understood the anger of the protesters but it did not justify “anti-state actions, calls to storm parliament and overthrow the government”.

Georgia and Russia fought a war in 2008, after which Russia recognised two breakaway Georgian regions, South Ossetia and Abkhazia, as independent states. Georgia and most of the international community consider the territories de facto occupied by Russia.

The appearance of the Russian MP Sergei Gavrilov, who has backed independence for the two territories, sitting in the seat of the parliamentary chair and speaking in Russian, sparked the outrage. Some protesters carried abusive signs about Russia and its president, Vladimir Putin.

The protests follow a year of increasingly polarised politics in Georgia, with frustrations at the ruling Georgian Dream party mounting. The incident with the Russian MP merely proved the final straw.

Bidzina Ivanishvili, the billionaire former prime minister and leader of Georgian Dream, said he “fully shares the sincere outrage of the Georgian citizens”.

The former president Mikheil Saakashvili, who now has Ukrainian citizenship and faces criminal charges in Georgia, called on police to join with the protesters. Saakashvili, who has embarked on a political career in Ukraine, has said the Georgian accusations against him are motivated by revenge and has accused Ivanishvili, who made his billions in Russia, of allowing increasing Kremlin influence in Georgia. “Ivanishvili’s regime must cede power,” he said in a video address on Friday.

The US embassy in Tbilisi said: “We understand the frustrations that many people are feeling today, and we call on all sides to remain calm, exercise restraint, and act only within the framework of the constitution.”

The speaker of the Russian State Duma, Vyacheslav Volodin, accused Georgia of failing to uphold the norms of international conventions. “They could neither provide security at the event, nor protect the Russian delegation from attacks and threats,” he told the Russian news agency Interfax.

The Kremlin blamed Georgian radicals for the violence and called events “an anti-Russian provocation”. Zourabichvili responded by calling Russia “an enemy and occupier”, and accused Russia of helping to trigger the protests.

Organisers of the pride event said that with tensions running high it was inappropriate to go ahead with the march on Saturday. “It was a hard decision for us all to make because we put so much energy, resources and passion to it,” a Tbilisi Pride member, Tamaz Sozashvili, told Reuters. “But on the other hand, we acknowledge the ongoing political situation in the country. We think this is not the right time to do it.”