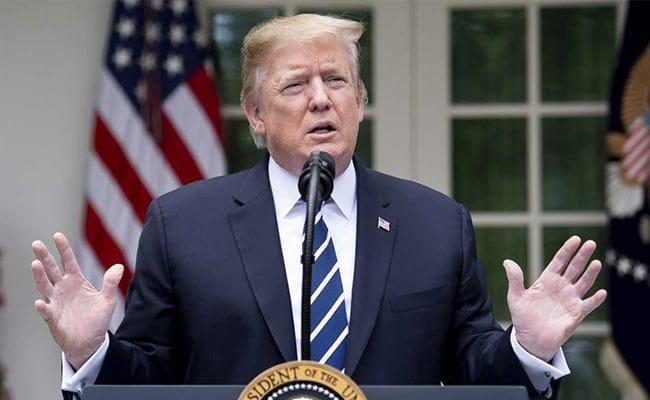 On Thursday, an Iranian missile destroyed a US Global Hawk surveillance drone, an incident that Washington said happened in international airspace.

U.S. President Donald Trump said on Saturday he would impose fresh sanctions on Iran but that he wanted to make a deal to bolster its flagging economy, an apparent move to defuse tensions following the shooting down of an unmanned U.S. drone this week by the Islamic Republic.

On Thursday, an Iranian missile destroyed a U.S. Global Hawk surveillance drone, an incident that Washington said happened in international airspace. Trump later said he had called off a military strike to retaliate because it could have killed 150 people.

Tehran repeated on Saturday that the drone was shot down over its territory and said it would respond firmly to any U.S. threat.

Speaking in Washington on Saturday before heading to the U.S. presidential retreat at Camp David, Trump indicated the government was taking a diplomatic path to put pressure on Tehran by moving to impose new sanctions.

Military action was “always on the table,” the president said, but he added that he was open to quickly reaching a deal with Iran that he said would bolster the country’s flagging economy.

He later wrote on Twitter from Camp David: “We are putting major additional Sanctions on Iran on Monday. I look forward to the day that Sanctions come off Iran, and they become a productive and prosperous nation again.”

The Trump administration has sought to use promises of economic revival to solve other thorny foreign policy challenges, including the Israel-Palestinian peace process, with the White House outlining on Saturday a plan to create a global investment fund to lift the Palestinian and neighboring Arab state economies.

Both Trump and Tehran have said they are not seeking a war, but Iran has warned of a “crushing” response if attacked.

“Regardless of any decision they (U.S. officials) make… we will not allow any of Iran’s borders to be violated. Iran will firmly confront any aggression or threat by America,” Foreign Ministry spokesman Abbas Mousavi told the semi-official Tasnim news agency on Saturday.

A senior commander of the elite Revolutionary Guards struck a similarly defiant note, in comments quoted by the Islamic Republic News Agency (IRNA).

“If the violation is repeated then our response will be repeated,” said Brigadier General Amirali Hajizadeh, head of the Guards’ aerospace division. “It’s possible that this infringement of the Americans was carried out by a general or some operators.”

Iran’s Foreign Ministry summoned a United Arab Emirates envoy on Saturday because the UAE allowed the drone to be launched from a U.S. military base on its territory, the Fars news agency reported.

The Iranian foreign minister, Mohammad Javad Zarif, published a map on Twitter with detailed coordinates which he said showed the drone was flying over the Islamic Republic’s territorial waters.

U.S. Secretary of State Mike Pompeo said in a statement on Saturday that the United States had “shown beyond any doubt” that the drone was in international airspace.

“When the Iranian regime decides to forgo violence and meet our diplomacy with diplomacy, it knows how to reach us,” he said. “Until then, our diplomatic isolation and economic pressure campaign against the regime will intensify.”

He also denied reports U.S. forces would evacuate personnel from a military base in neighboring Iraq over what military sources had said were “potential security threats.”

Tensions in the region began to worsen significantly when Trump pulled out of a 2015 nuclear deal between Iran and six powers and reimposed sanctions on the country. The sanctions had been lifted under the pact in return for Tehran curbing its nuclear program.

The United States and Iran’s main regional rival Saudi Arabia have also blamed Iran for attacks on two oil tankers last week in the Gulf of Oman and on four tankers off the United Arab Emirates on May 12.

Both incidents happened near the strategic Strait of Hormuz, a major conduit for global oil supplies. Iran has denied any involvement.

A Department of Defense spokeswoman said it would not comment on cyberspace operations, intelligence or planning.

Washington, meanwhile, accused Tehran of stepping up cyber attacks. Chris Krebs, director of the Department of Homeland Security’s cybersecurity agency, said on Twitter that officials have detected a rise in “malicious cyber activity” directed at the United States by people tied to the Iranian government.

World powers have called for calm and sent in envoys for talks to try to lower the temperature of a dispute that has pushed up the price of oil. [O/R]

German Chancellor Angela Merkel called on Saturday for a political resolution of the crisis, adding: “That is what we are working on.”

Iran has threatened to breach the deal if the European signatories to the agreement fail to salvage it by shielding Tehran from U.S. sanctions.

“The Europeans will not be given more time beyond July 8 to save the deal,” Mousavi said, referring to Iran’s deadline of 60 days that Tehran announced in May.

The U.S. Federal Aviation Administration on Thursday prohibited U.S. operators from flying in Tehran-controlled airspace over the Strait of Hormuz and Gulf of Oman. Saudi Arabian Airlines joined some other international airlines on Saturday in taking related precautions.

Iran said on Saturday that its airspace was “safe and secure” for all planes to cross, Tasnim reported.

Separately, Iran has executed a former contract employee for the aerospace organization of the Ministry of Defence on charges of spying for the U.S. Central Intelligence Agency, the IRIB news agency reported on Saturday.