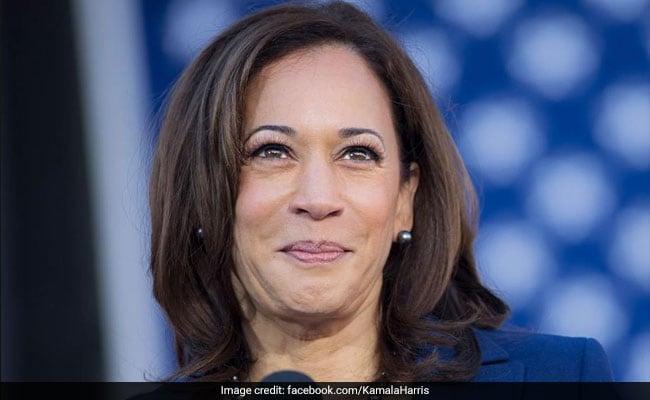 A drum line serenaded Sen. Kamala Harris, D-Calif., as she descended an escalator at a convention center to greet a throng of cheering supporters.

It was the most memorable entrance of the nearly two dozen Democratic presidential candidates who spoke at a party pep rally here over the weekend – and a sign that Harris, who has struggled to establish a political philosophy to compete with her most prominent rivals, is still seeking to distinguish herself.

Throughout the weekend, she cast herself as a candidate of action, seeming to embrace the notion that the Harris brand is one built on practicality as much as any sort of sweeping vision.

“I think it’s important to have grand and broad ideas for how to fix this world,” Harris told voters at a Friday night meet-and-greet. “But it’s also important, and I believe for me it’s a priority, how can I address the things that wake people up in the middle of the night?”

Harris’ performance, which had the feel of a reboot, reflected the challenge confronting her as she seeks to capitalize on her prime spot this week in the first candidate debates in which she will share center stage Thursday with polling leaders former Vice President Joe Biden and Sen. Bernie Sanders, I-Vt.

In a crowded field in which Sanders’ Democratic socialism and Massachusetts Sen. Elizabeth Warren’s heavily regulated capitalism are elbowing for supremacy on the far left and Biden is positioning himself as a centrist best positioned to beat President Donald Trump, Harris is known more for her prosecutorial performance in Senate hearings than she is for advocating any particular approach to policy.

“Everybody has their little niche, and I don’t think Kamala has a niche yet,” said Leslie Stein, an engineer and California transplant to Las Vegas who attended a Harris speech last week in that city and has been following Harris’s career from her district attorney days. “She’s saying a lot of what’s out there, but she hasn’t made anything her own.”

Stein’s reaction is one offered by many people who attend Harris’s campaign events. While many say they see Harris as a trailblazer who represents change, few can articulate exactly what kind of change a Harris administration would yield – particularly in contrast to the well-defined agendas of other contenders.

“I know about Elizabeth Warren because that’s her thing: plans and ideas. Bernie Sanders I know because he’s run before,” said Shirley Sandoval, a 76-year-old Las Vegas resident. “And I know Joe Biden because he’s been around so long – you just kind of know him, even though he’s changed his mind on things. Even big things, like abortion.”

“(Harris) hasn’t spoken as much on policy as I would like to hear her speak on it,” Sandoval said. “She’s got some good ideas, but I haven’t heard as much as I would like.”

Those who have counseled Harris, 54, a former prosecutor and California attorney general elected to the Senate in 2016, say she hews to a sense of pragmatism rather than a strict ideology.

“She’s pretty much a fundamentally pragmatic person … always asking about: What is the real impact this is going to have on people’s lives?” said Jill Habig, who served as an adviser to Harris when she served as attorney general and in her Senate campaign. “But in terms of the methodology of how you get to that goal, she’s not very ideological.”

The result, so far, is a policy portfolio that often seems comprised of one-off announcements that put her largely in line with long-held, mainstream Democratic positions.

The thread that has connected her proposals is an emphasis on what she has presented as practical actions that can be put in place while long-term solutions are hammered out. Harris’ proposals for tightened controls on guns and a path to citizenship for young undocumented immigrants and their parents rely on executive action, an approach used by Trump and President Barack Obama in the face of opposition from Capitol Hill. Her proposals for rent assistance and a middle-class tax credit of up to $6,000 per year, her campaign staff argues, provide more short-term tangible benefits than, say, more dramatic moves like Warren’s pledge to break up big tech companies.

She and her campaign aides argue her policy to raise teacher salaries by an average of $13,500 to match those of “similarly educated professionals” would improve student outcomes and school environments, achieving broad benefits by addressing the problem directly. But outside of a broader education policy, it was possible to see such a policy as an appeal to the highly influential teachers’ unions and suburban women Harris is courting, rather than a piece in a broader policy puzzle.

When it comes to her broader policy drive, Harris doesn’t spare much time for labels. Of all the words she has used since declaring her presidential candidacy, she has allocated few to positioning herself left of center, right of the far left, or anywhere in between.

When a voter in Ankeny, Iowa, said she heard the media labeling Harris as a moderate, the candidate raised her eyebrows and stifled a smile. When a reporter asked her if she would call herself “an Obama Democrat,” Harris said simply, “I call myself Kamala.”

Her approach to date has fostered support. She has raised millions of dollars, begun growing her ground operations in the four early voting states and even has a devoted fan club called “the K-Hive,” a takeoff on Beyonce’s fan group.

Harris is also making a hiring push in Iowa that she says will give her more staffers there than any other candidate. In South Carolina, local organizer Brenda Price and her “Reckoning Crew” of 100 organizers just threw themselves behind Harris.

Early state polls show Harris’ limitations and her potential. When California voters’ first and second choices were tabulated by the Berkeley IGS poll, Harris was tied in her home state with Biden and Warren. But when voters were asked their first choice, Harris trailed those two candidates as well as Sanders. The results, which had Harris trailing even in her home turf of the Bay Area, echoed the results of a Des Moines Register poll of Iowa voters, far more of whom were considering Harris than firmly committed to her.

In South Carolina over the weekend, a must-win state for Harris, she maintained one of the largest and most vocal groups of supporters that was as big as Biden’s, Sanders’ and Warren’s, and thanks in part to that drum line, just as loud. The Rev. Jesse Jackson sneaked into her pre-convention rally. She sparked visible interest.

One of her prominent backers, former state legislator Bakari Sellers, who has publicly wondered whether the senator was too cautious, tweeted that she had “set the stage on fire.” But this week in Miami, Harris will be trying to convert undecided voters, not inspire the ones she’s already convinced – and she won’t have much time to do it.