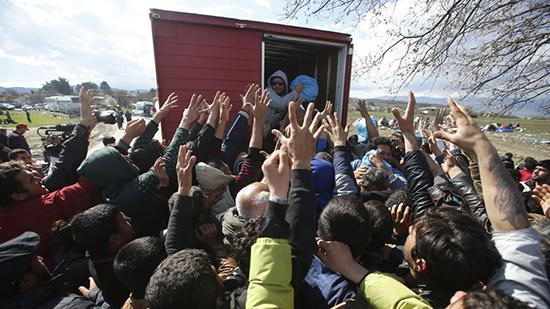 Brussels and Berlin frequently point out that refugees have human rights, but the reality in neighboring Balkan states looks different. That is cynical, says Norbert Mappes-Niediek.

The people of North Macedonia know full well what is behind the EU’s moral standards and how to get around them. Long before the country had that name, and long before hundreds of thousands of refugees came to Germany from the Middle East, its government got several practical lessons in the discipline.

Back then, almost a decade ago, hundreds of citizens from the tiny Balkan country applied for asylum in Germany. Alarmed by asylum authorities, German diplomats in Skopje put their foot down and asked, “What is going on here?”

Most of those who were applying for asylum were Roma from the city’s worst neighborhoods. Most were not actually seeking asylum, rather, they wanted free health care and the chance to spend a winter sheltered from the bitter cold and not sleeping in drafty spaces.

No matter, German officials told their Macedonian counterparts, though we feel bad, the problem is for you to solve. Regarding the Roma, it was made clear that Germans are not racists and ethnicity had nothing to do with the decision. Nevertheless, it was also made clear that if local authorities failed to control the situation, Germany would be forced to reinstate visa requirements.

Macedonia did get a grip on the situation. Its police fulfilled German requests and stopped anyone it suspected of traveling to the EU for reasons other than applying for asylum in Belgium or Germany at Macedonia’s border with Serbia. And who did they suspect? Anyone who looked like they might be Roma: “You,” said border patrol officers, “get out of the bus.”

That was, of course, illegal. And the Germans were intentionally kept in the dark about it. Local authorities knew that German citizens were sensitive about ethnic discrimination. They also knew that if their border policies became public knowledge they would face serious criticism in the EU’s next progress report, the annual report that records membership requirement infractions by candidate countries. Human rights are at the very top of the list.

It was not only important that the Germans did not find out, they didn’t want to find out. Two years later, the European Union won the Nobel Peace Prize. Southeast European politicians quickly learned how to cover for their wealthy western neighbors by singing the praises of human rights at various conferences by day, while their border police beat back refugees at home at night.

Today, when African migrants and Syrian refugees are brutally beaten and illegally deported at the Bosnian-Croatian or Turkish-Bulgarian borders, human-rights respecting citizens in the West remain silent. In general, they say it is an open secret that eastern European countries tend to be nationalist xenophobes. Though one doesn’t want to say it too loudly, because we in the West don’t have national prejudices.

Western doublespeak suits ruling cynics in the region just fine. It gives them credit to later win concessions from their cynical Western partners.

But such contradictions are more difficult to deal with in countries that have less experience dealing with Western hypocrisy, countries like Italy. Although thoroughly Western, its leaders say, either everyone abides by EU rules, or we fight refugee influx – there is no other option, at least in the long run.

Germany has managed to strike a balance. The moral credit that its chancellor received some three-and-a-half years ago has yet to be entirely liquidated. Still, many signs point to the day when Trumpism will eventually carry the day.

The so-called 2015 refugee crisis brought about a rare moment of self-reflection in Germany. The self-critical message from the highest political posts in Berlin was that Mediterranean countries, especially Greece, had been left to defend Europe’s borders on their own for far too long.

Lessons were learned and the call for more solidarity and the equitable distribution of refugees across the EU was made. Yet, nothing came of it, things only seemed to get worse. As a result, Germany peered out across the castle moat and saw itself surrounded by anti-migrant and anti-refugee neighbors.

That distant cordon relieves Germany of having to exercise its own brutality, and puts its humanitarian efforts in a favorable light. “Everyone has the right and the responsibility to rescue people in distress,” was the message from Berlin when Italy recently impounded a migrant rescue ship and threatened to put its crew on trial.

We gladly acknowledge our right and duty to rescue others, and by doing so ensure that deeds need not back our words. The next time it comes to sharing the burden of migration, Germany’s moral credit should be taken into account.

Norbert Mappes-Niediek lives in Graz, Austria, and is a southeastern Europe correspondent for number of German-language newspapers.