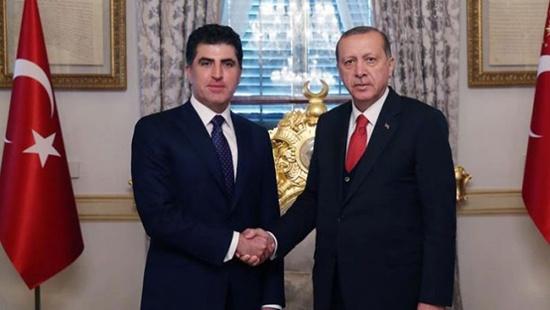 Nechirvan Barzani, who on June 10 was sworn in as the new president of Iraq’s semi-autonomous region of Kurdistan, has arrived in Turkey for an official visit, the Artı Gerçek news website reported on Friday.

The visit is taking place two days prior to the repeat mayoral election in İstanbul and is Barzani’s first official foreign visit as president of Iraqi Kurdistan.

He is expected to have talks with Turkish President Recep Tayyip Erdoğan, who has been campaigning in support of his party’s candidate for İstanbul.

“I don’t have a rally tomorrow as I will be welcoming a special guest,” Erdoğan said on Thursday.

The visit drew criticism in Turkey by many who interpreted it as a move by Erdoğan to lure Kurdish voters ahead of Sunday’s mayoral polls.

Turkey’s main Kurdish political movement, the Peoples’ Democratic Party (HDP), has been supportive of opposition nominee Ekrem İmamoğlu and vowed to maintain its position despite a newly revealed call by the jailed leader of the outlawed Kurdistan Workers’ Party (PKK), Abdullah Öcalan, to remain “impartial.”

Erdoğan on Thursday claimed that Öcalan was engaged in a feud with the HDP.

The Kurdish party has frequently been the subject of terrorism-related accusations from government circles for alleged alignment with the PKK. Many of its officials have stood trial and been imprisoned.