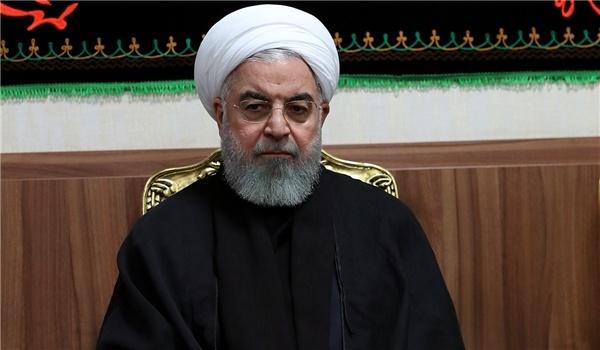 TEHRAN (FNA)- Iranian President Hassan Rouhani stressed his country’s policy of de-escalation, describing the US interventionist military buildup as the main cause of problems in the region.

“The Iranian oil platforms, cargo ships and even passenger planes have sometimes in the past few years been attacked by the US warships and recently, their drone violated Iran’s airspace and the Iranian defense forces shot it down for ignoring several warnings,” President Rouhani said in a meeting with President of the Inter-Parliamentary Union Gabriela Cuevas Barron in Tehran on Sunday.

He termed the US aggression as the start of new tension in the region, and said, “This highly sensitive region and security of the Persian Gulf and the Sea of Oman waterways are crucially important to many countries and therefore, we expect the international bodies to show proper reaction to this US aggressive move.”

President Rouhani underlined that the United States’ interventionist military deployment is the root cause of problems in the region, and said, “The Islamic Republic of Iran’s unchanging approach entails decreasing tensions, preventing any clashes among the countries’ military forces and establishing peace and stability in the region and across the world.”

He referred to abundant problems created by the US military intervention in Afghanistan, Iraq, Syria and Yemen, and said, “We believe that security of all regions in the world and the Persian Gulf should be provided by the regional states.”

The United States has been building up military forces in the entire region, specially in the Persian Gulf, to intimidate Tehran into talks. Last week, the US military show down against Iran almost spiraled into war.

The Islamic Revolution Guards Corps (IRGC) Aerospace Force shot down an American spy drone over the territorial waters of Iran near the Strait of Hormuz at dawn on Thursday.

The United States had confirmed that one of its reconnaissance planes was shot down by Iranian air defenses, but denied that it intruded into Tehran’s airspace at the time.

Also, US President Donald Trump said the US air force was “cocked and loaded” to attack three Iranian targets on Friday morning, but he called off the strike with 10 minutes to spare after being told that the airstrike might kill as many as 150 people.

Trump said in a series of morning tweets that he decided late on Thursday that the death toll was not a proportionate response to the Iranian shooting down of a US spy drone off the Iranian coast 24 hours earlier.

After Trump’s remarks, Commander of the IRGC Aerospace Force Brigadier General Amir Ali Hajizadeh said that his forces could have shot down a US P8 aircraft with 35 on board which was violating Iran’s airspace, but decided to shoot down the drone to only send a message to Washington.

“We intended to send a message to American terrorists in the region,” Brigadier General Hajizadeh said on Friday, adding that his forces had also traced a military P8 aircraft violating the airspace of Iran.

“Along with the American drone was an American P8 aircraft with 35 on board, and it was also violating our airspace and we could have downed it too,” he said, adding, “But we did not do (shoot down) it, because our aim was to warn the terrorist forces of the US.”

General Hajizadeh also stressed on Saturday that Iran was not after war but was fully ready to defend itself, adding that the fate of the downed US spy drone was waiting for any intruding flying object.

“Our response to anything trespassing Iranian territory is like this, and if such acts of aggression are repeated, our response will also be the same,” General Hajizadeh said.

“We don’t embrace war but we are ready to fully defend the country,” he said.

“We possess a collection of US drones which is a proof that US has violated Iran’s airspace and shows that they don’t want to respect the international law,” General Hajizadeh said.

“If such an aggression is repeated, we will add other US (military) products to complete this collection,” he noted.

“The US measure was in violation of international law and we acted according to our legitimate responsibility,” General Hajizadeh said, adding, “It is possible that a US general or some operators were behind this American aggression, we don’t know that. But that measure (intruding into Iranian airspace) is a violation of international aviation rules by a spy drone which then received our natural response.”

On Thursday evening, Iranian Foreign Minister Mohammad Javad Zarif said that his country had retrieved parts of the US Global Hawk that was shot down from the country’s territorial waters, rejecting Washington’s claim that the aircraft was targeted in international waters.

“(The) US drone took off from UAE in stealth mode and violated Iranian airspace,” Zarif wrote on Twitter, adding that the Global Hawk drone “was targeted near… Kouh-e Mobarak” region in the Central district of Jask in Hormuzgan province after the aircraft violated Iran’s airspace.

Zarif even provided the coordinates where the US aircraft was intercepted, and added, “We’ve retrieved sections of the US military drone in OUR territorial waters where it was shot down.”

In an earlier tweet, Zarif stated that Iran “will take this US new aggression to (the) UN and show that the US is lying about international waters”.

The Iranian foreign minister noted that Tehran does not want war, “but will zealously defend our skies, land and waters”.