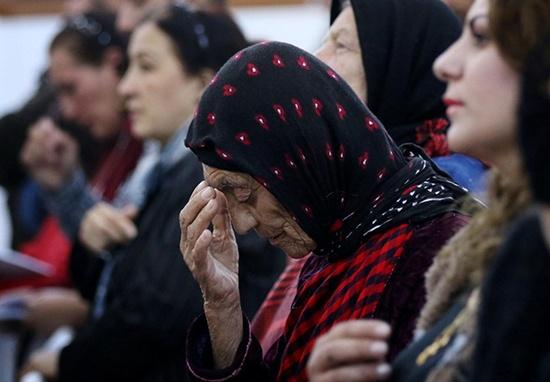 In reporting from refugee camps, there is a fine line between raising awareness and treating war-scarred refugees as if they were performers in a circus freak show

In 2016, while reporting from a refugee camp in northern Iraq, my translator excused herself and stepped outside of the tent. “I can’t do this,” she said, tearfully. “Don’t you see the pain on the mother’s face? Each time she tells the story, she relives the event. I can’t ask her to do it again.”

The mother in question was a Yazidi Kurd from Sinjar whose teenage daughter had been abducted by the Islamic State in the summer of 2014.

The family had not heard from her in two years. Her younger son was still in a state of shock and had not spoken a word since his sister was taken. While he was getting help from a therapist at the camp, progress was very slow.

There were many such stories at the Ashti camp for internally displaced people, on the outskirts of the city of Sulaimania, each one tragic, each one unique, and each one haunting the days and nights of the camp’s 2,800 families.

While it is the duty of journalists to report the facts and tell the story, they must do so with compassion and dignity. These forlorn tales are great fodder for journalists looking for emotive “human interest” material to complement their war reporting, but one person’s story is another’s living nightmare.

In the age of social media, where an article’s worth is measured by the number of clicks and likes it receives, journalists covering wars, in their haste to capture a great story, can too often forget that the subjects of their reports are real people with real emotions.

Photos of journalists posing with smiling refugee children in rags and plastic slippers in cold temperatures may be well intentioned, but often the end result is the objectification of those children.

The photos say: “Look at me, I am here among these miserable people, and I am listening to their stories.” The photo – like the story – becomes less about the refugee and more about the journalist, exposing the people like subjects in a circus sideshow.

But camp administrations do not facilitate the sideshow. Most of the time, they hope the media attention will help engender more global awareness about the plight of their residents and perhaps generate more aid.

‘They just make stuff up’

Mohamed al-Zaharna has worked as a fixer for Western journalists in besieged Gaza for four years. After the 2014 war, journalists poured in looking to cover the humanitarian catastrophe, including families left homeless and destitute and now living in makeshift camps. Zaharna said it baffled him how many journalists appeared to find this hardship insufficiently moving in its original form, such that they felt compelled to exercise artistic license.

“I have many times been asked by journalists to help ‘set up’ photographs,” he said. “They ask for crazy things like: ‘Get that kid to climb up on the roof and play with a ball,’ or ‘Move those sofas outside so we can take pictures of the men sitting outside without a roof over their heads.’

Journalists don’t understand this, and they beg me to arrange to see them … they pick their cases like they are at a supermarket

“Later, when the photos are published in famous American or European newspapers and I read the captions, I am really surprised at how they can write such fabrications. They just make stuff up.”

As Zaharna puts it: “This man, this mother, these children, they used to be regular people, and then suddenly they became poor people sitting in a tent, no belongings and no hope. Journalists don’t understand this, and they beg me to arrange to see them … they pick their cases like they are at a supermarket. ‘No, we don’t want this mother, we want the man who lost his two kids … We want a home without electricity.’ They make value judgments on whose story is more tragic,” he said.

While this may seem a harsh indictment of the media coverage, it is not to argue the coverage must stop; quite the contrary. It is vital for the media coverage to continue, but with media professionals putting less effort into staging “money shots” and scripting stories for optimum melodramatic effect, and more focus on the actual stories on the ground – perhaps in the foreground, which can often go unseen and unheard.

So, this is the quandary faced by journalists. As a colleague told me, stories in this milieu “need to bleed, have a lot of bang-bang or have a picture of a blue-eyed Arab”. And this presents both a paradox and a rationale.

The paradox results from the modern proliferation of information. In the old days, a few large periodicals had a monopoly on the information and on the public’s eyeballs. The International Herald Tribune, Le Monde, Reuters and other wire services obtained – and to a great extent controlled – what the world saw in tragedies, ranging from Biafra to Bangladesh.

Today, that monopoly is broken. Information democratisation (some would say information anarchy) is the norm. First came the satellites, then the cable channels, and now the cellphones.

And herein lies the journalist’s quandary – how does the established media compete against a story, often unverified, which ends up on a blog site, Facebook or Twitter? How do “old-school” journalists compete against a cellphone with a camera when established media demand the time-consuming work to verify, write, source and double-source their stories?

This paradox also explains the shutting down of expensive overseas bureaus, the reduction in accredited journalists and the move away from paper-based periodicals. Subscriber numbers and advertising revenues are down, and the competitive pressure to show even a minor profit means that budgets are slashed to the bone.

The Washington Post may say “Democracy Dies in Darkness,” but it takes money to keep those lights on.

This also explains the rationale for producing only the biggest, most distinctive and most photogenic stories, as bureaus press for the best photo, the best story, or the best quote to attract an audience whose eyeballs are pulled in every direction by cable channels, websites, Twitter and Facebook.

Sadly, the real stories – whether ethnic disputes or intra-camp dynamics – may not be so marketable, ending up in niche publications that do not reach mass audiences. This, in turn, only fuels stereotypes, misinformation, and a tendency to generalise the unique and tragic experiences of many thousands of refugees and displaced persons. Worse still, it further dehumanises an already disenfranchised and marginalised segment of humanity.

The stories that we need to tell as journalists are those that challenge preconceptions and comfortable “truths” about “backward nations” seeking assistance and support. In short, they are the stories that are not as appealing.

They involve taking the time to listen to people we may dismiss as “irrelevant” or “uninspiring” at first glance, because they do not fit a more dramatic narrative. Less behind the camera directing and more cinema verite – documenting real life in an honest presentation – is the solution.

The real stories will be missed, and journalism will continue to suffer

A better understanding of these problems can lead to better solutions. As long as our professional environment is shaped by the new proliferation and democratisation of information, we will be compelled to focus exclusively on acts of violence and shocking events – stories that reaffirm stereotypes rather than break them, or narratives that serve a political agenda, the long-form individual human interest story or clickable photo montage.

The real stories will be missed, and journalism will continue to suffer.

This article is a condensed version of an article by the same name published in Lost Stories Retold, May 2019 (TRT World Research Centre).

Tanya Goudsouzian is a Canadian journalist who has been covering the Middle East and Afghanistan for over 15 years. Follow her on Twitter @tgoudsouzian