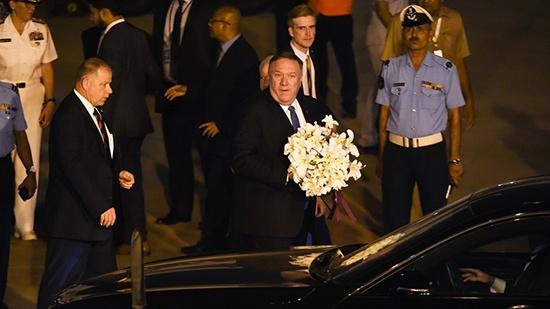 The top US diplomat has landed in New Delhi, aiming to pressure the Indian government into rejecting Russian S-400 air defense systems and China’s Huawei mobile tech in favor of “better” military and trade deals with Washington.

Expanding cooperation in energy, aviation, space, and defense fields will top Secretary of State Mike Pompeo’s agenda during his three-day visit to India, the State Department said just as their boss landed in New Delhi on Tuesday evening.

Pompeo is expected to pressure India into compliance on a number of issues, including the S-400 missile defense deal with Russia, the purchase of Iranian and Venezuelan crude oil, and limiting Huawei’s access to the massive South Asian market that Washington is now keen to capture.

But while Pompeo is bringing a bag full of American goodies to the discussion table, India has made it explicitly clear over the last few months that it will not bow to US pressure at the expense of its own strategic goals, regardless of how tempting the offers might be.

Despite the tough talk from Washington, Narendra Modi’s government still expects to be granted a waiver from sanctions under the Countering America’s Adversaries Through Sanctions Act (CAATSA), which the US has repeatedly threatened to introduce if New Delhi goes ahead with its $5 billion purchase of the Russian rockets.

As a carrot, Washington is willing to offer India some of its own military technology – the Patriot and THAAD missiles – as an alternative. The US is also keen to sell fighter jets to India, ranging from Boeing’s F/A-18 and Lockheed Martin’s F-21 (a F-16 upgrade) to potentially even F-35 stealth fighters. India was granted Strategic Trade Authorization tier 1 status last year, which allows license-free access to certain NATO defense technologies.

President Donald Trump, who banned Huawei’s products and barred US companies from trading software and components with the Chinese company, made no secret that the US is keen to secure the 5G leadership and India – with a population of roughly 1.4 billion people – seems like an ideal place to start.

On his trip, Pompeo is expected to persuade India to boost US oil and “freedom gas” purchases to cut reliance on Venezuelan and Iranian crude, as Washington continues to pursue regime-change-through-sanctions policies in these countries.

The chief diplomat also hopes US would eventually compete with Russia in the civil nuclear sphere, even though US companies have so far been reluctant to engage in such projects – in part due to India’s harsh laws on the reactor supplier’s liabilities in case of disasters.

Pompeo’s visit will pave the way to bilateral discussions between Trump and Modi later in the week at a G20 meeting in Japan. Trump, who has repeatedly accused India of refusing to grant US companies a free access to its markets, recently canceled the country’s participation in the Generalized System of Preferences (GSP) program, which allowed New Delhi to export over $5 billion worth of its goods to the US duty-free. He also imposed steel and aluminum tariffs. India retaliated by imposing reciprocal tariffs on several dozen American products.