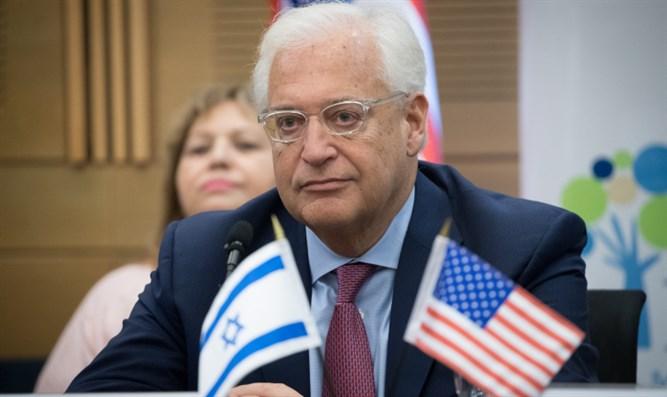 American Ambassador to Israel David Friedman expressed optimism Wednesday regarding the US-led peace summit in Bahrain, where the Trump administration unveiled its economic plans for promoting peace in the Middle East.

Speaking with Efi Trigger on Army Radio – Galey Tzahal Wednesday morning, Friedman said the summit was “heading in the right direction”, despite the Palestinian Authority’s boycott of the gathering.

“Things are heading in the right direction, we’re getting a good showing in Bahrain with Gulf states, Egypt, and Jordan in attendance, several Israeli businessman, and even a Palestinian showing; not as many as there should, but it’s a good first step and I look forward to good things.”

“What can we achieve, the real missing ingredient is Palestinian participation. Their absence is a shame, we’re scratching our heads and it’s difficult to understand what downside there is to the Palestinians and what risks, as the conference is for one purpose – to better Palestinian life opportunities. No one’s asking why they’re not there, but it doesn’t mean that we all stop what were doing and wait for them because it could be a long time.”

Regarding the three-way US, Russia, Israel meeting and a possible escalation; President Trump spoke of “obliteration”?

“Israel has been concerned about Iran as they are always a cause for concern, and we concur; we’re doing the best we can to mitigate it. The 3-way meeting was really good, I was in attendance. There were disagreements, not so much between Israel and the US, but with Russia; but the dialogue was thoughtful and respectful. The Russians are looking for solutions as well. In Bahrain they’re also looking for solutions in a different direction.”

Should we expect a unified Russian/US to call to get Iran out of Syria?

“I think Iran has to get out of Syria; under what circumstances, time frames we don’t know but the pressure is working; we hope it will continue working and we’ll get the right result.”

Back to Bahrain, Friedman said: “It’s not our phrase, we never used ‘Deal of the Century’ – we’re not so cavalier how we describe it; we’ll come out with scenarios of a political vision; we’ll assess the timing and look again after Bahrain is over, speak to the President and Israeli government. How do we avoid animosity with Palestinian leadership? We know what it looks like but were still assessing.”

Do you still stand by your statement to the NYT that Israel has a right to annex Judea and Samaria?

“I stand behind my words to the NYT 100 percent; it has been American policy and expectation for the last 20-30 years; everybody knows there’s no scenario when Israel will leave the entire Judea and Samaria; as long as I’ve been conceptualizing this issue.”

Is it a departure from US policy to let Netanyahu annex parts of Judea and Samaria?

“No plan was presented with regard to annexation; no unilateral discussions; we will deal with it if and when it comes up, we’ll do analysis, and I won’t speculate on what will be in the future.”