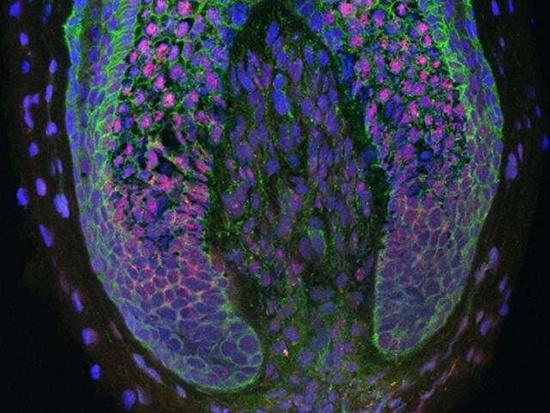 In the first study, researchers led by Angela Christiano, Ph.D., the Richard & Mildred Rhodebeck Professor of Dermatology at Columbia University Vagelos College of Physicians and Surgeons, discovered previously unknown cells that keep mouse hair follicles in a resting state and show that inhibiting the activity of these cells can reawaken dormant follicles.

In a second study, Christiano’s team created a way to grow human hair in a dish, which could open up hair restoration surgery to more people, including women, and improve the way pharmaceutical companies search for new hair-growth drugs.

In male and female pattern baldness, many hair follicles still exist but are dormant. The search for new drugs that reawaken follicles and induce hair growth has been limited by the field’s focus on finding drugs that work along the same pathways as finasteride and minoxidil, the only two drugs currently available for men with male pattern baldness.

In their latest study, the researchers wanted to get a detailed picture of the natural processes that keep follicles dormant, so they looked for factors that controlled the JAK pathway activity in the hair follicle.

The search revealed a previously unknown immune-related cell type that produces a substance known as Oncostatin M that keeps the follicles in a state of dormancy. “Rare subsets of immune cells were previously difficult to identify in whole skin, but this work was facilitated by our ability to sequence individual cells and pinpoint the ones making Oncostatin M,” says Etienne Wang, Ph.D., first author of the study. These cells are most similar to macrophages, which are scavenger cells of the immune system, and the team found them in close association with resting hair follicles.

The researchers named these cells trichophages, after the Greek word tricho for hair.

“Our previous studies implicated JAK-STAT signaling as one potential new therapeutic pathway for hair loss disorders by targeting hair follicle stem cells with JAK inhibitors,” Christiano says. (A biotech company recently reported results of a small phase 2 trial of a topical JAK-STAT inhibitor based on these studies.) “Here, we show that blocking the source of the JAK activating signal outside the hair follicle is another way to target this mechanism.”

Most drug development has focused on treatments for male pattern hair loss, and the majority of clinical trials are conducted exclusively in men.

“These new pathways may lead to new treatments for both men and women suffering from hair loss, since they appear to be acting independently of male hormone pathways,” Christiano says. “Especially if treatments are used topically, that could avoid the related side effects seen with finasteride and minoxidil.”

In a second study, aimed at using stem cells for hair growth, the Columbia researchers have created a way to grow human hair in a dish, which could open up hair restoration surgery to more people, including women, and improve the way pharmaceutical companies search for new hair growth drugs.

It is the first time that human hair follicles have been entirely generated in a dish, without the need for implantation into skin.

For years it’s been possible to grow mouse or rat hairs in the lab by culturing cells taken from the base of existing follicles.

To break the resistance of human hair cells, Christiano has been trying to create conditions that mimic the 3-D environment human hair cells normally inhabit. The lab first tried creating little spheres of cells inside hanging drops of liquid. But when the spheres were implanted in mice, the results were unpredictable: The cells from some people created new hair while others didn’t.

In the new study, Christiano’s team exploited the unique capability of 3-D printers to create a more natural microenvironment for hair follicle growth.

The researchers used 3-D printing to create plastic molds with long, thin extensions only half a millimeter wide. “Previous fabrication techniques have been unable to create such thin projections, so this work was greatly facilitated by innovations in 3-D printing technology,” says Erbil Abaci, Ph.D., first author of this study.

After human skin was engineered to grow around the mold, hair follicle cells from human volunteers were placed into the deep wells and topped by cells that produce keratin. The cells were fed a cocktail of growth factors spiked with ingredients, including JAK inhibitors, that the lab has found stimulates hair growth.

Though the method needs to be optimized, engineered human hair follicles created in this way could generate an unlimited source of new hair follicles for patients undergoing robotic hair restoration surgery.

Hair restoration surgery requires the transfer of approximately 2,000 hair follicles from the back of the head to the front and top. It is usually reserved for male patients whose hair loss has stabilized and who have enough hair to donate.

“What we’ve shown is that we can basically create a hair farm: a grid of hairs that are patterned correctly and engineered so they can be transplanted back into that same patient’s scalp,” Christiano says.

“That expands the availability of hair restoration to all patients—including the 30 million women in the United States who experience hair thinning and young men whose hairlines are still receding. Hair restoration surgery would no longer be limited by the number of donor hairs.”

The engineered follicles also could be used by the pharmaceutical industry to screen for new hair growth drugs. Currently, high throughput screening for new hair drugs has been hampered by the inability to grow human hair follicles in a lab dish. No drugs have been found by screening; the only two approved for the treatment of pattern hair loss—finasteride and minoxidil—were initially investigated as treatments for other conditions.

The team hopes that cultured hair farms will open up the ability to perform high throughput drug screens to identify new pathways that influence hair growth.