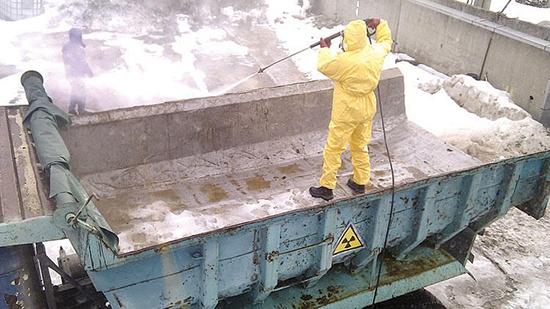 Employees at the site of the Chernobyl nuclear disaster site have faced many fears and hardships during isolation works initiated by the European Union in 1995, two employees of the sole Turkish company taking part in the project have said.

The deadly 1986 nuclear disaster in Soviet-era Ukraine has been a matter of debate after the hard-hitting five-part “Chernobyl” series of the HBO and Sky companies drew a huge audience worldwide.

“I didn’t tell my wife and family that I was working at the Chernobyl site. They were aware of it after a long time. My wife was very worried. But we earned more in Chernobylcompared with other workplaces,” headworker Yücel Musaoğlu told daily Hürriyet of the five years he spent in the Ukrainian ghost town Pripyat adjacent to the murderous nuclearplant.

“I got a job offer at the Chernobyl site when I was working in Russia in 2013. I didn’t want to accept it at first. To be honest, the word ‘Chernobyl’ scared me. Many families from places near Chernobyl had fled to the areas I had been working in Russia. They told of many harrowing stories. That’s why I wanted to refuse in the first place. But then I decided to go there. I was screened from A to Z, from head to toe, if I had a disease or not. Medical screening took a long time. Trainings started afterwards. Occupational health and safety trainings also took a long while. Then, we were informed about radiation. After seeing all these, my worries eased. I worked at a place just 300 meters to the fourth reactor,” he said.

Workers can stay in the fourth reactor, which is the focal point of the nuclear disaster, for only 15 minutes because they become exposed to the daily allowed limit of radiation in this short time period. Every worker at the nuclear plant site carries dosimeter detectors, which alert them if the radiation level goes above the daily limit of 100 microsieverts.

The maximum permitted dose to workers occupationally exposed to radiation is 20 millisievert per year, according to the World Health Organization. However, the dose of radiation exposure during working life should not exceed 400 millisieverts. That is why some workers were sent by the Okyanus Grup, the Turkish company taking part in the confinement project, back to Turkey earlier than the date indicated in their contract.

The daily level of radiation never exceeded 16 microsevierts at the site, said architect Emrah Uygun, who worked as the project manager of Okyanus Grup at the site for five years starting from 2012.

The EU decided to set up a fund to protect the environment and its citizens from radiation risk arising from Chernobyl in 1995. Two French companies started leading the works to confine the fourth reactor with a steel case in 2007. Turkey’s Okyanus Grup was involved in the project at the end of 2011, according to Uygun’s remarks.

“The process assembly took five years. Since the top of the explosion site was very dangerous the steel case was put 500 meters off the reactor. Then, it was carried by a rail system and placed over the reactor. The most important part of the works was on our shoulders. Any small mistake in preparing the steel case, which was supposed to prevent the radiation leak, could have caused a new disaster,” he said.