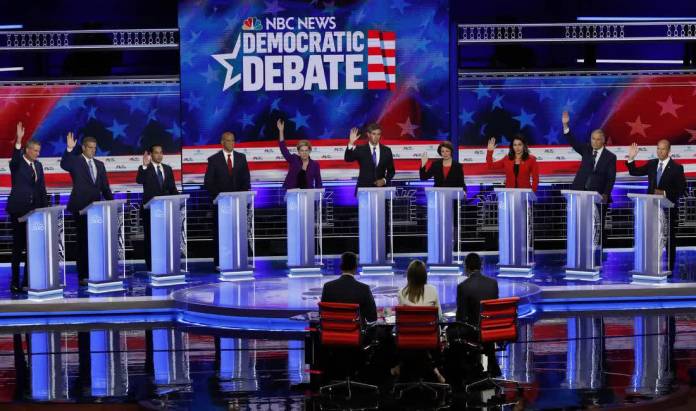 From expanding health care to fighting climate change, US Democratic candidates have fought to make a name in the crowded presidential race. Only one candidate called the Iran deal “wrong” and vowed to stay out of it.

US Senator Elizabeth Warren, who has become a front-runner in the race, said she would fight for a government-supported universal health care plan dubbed “Medicare-for-All,” criticizing those who decried such a system.

“What they are really telling you is they just won’t fight for it,” Warren said. “Health care is a basic right, and I will fight for it.” Warren and New York Mayor Bill de Blasio were the only who two said they supported a system that eliminated private insurance.

The subject of health care has become a crucial point in the 2020 presidential election, especially after President Donald Trump took executive action to erode parts of his predecessor Barack Obama’s expansion of health care access, popularly known as Obamacare.

On the issue of Iran, New Jersey Senator Corey Booker was the only one candidate on stage that said he did not support the Iran nuclear deal, calling it a “mistake.” However, when pressed to explain why, he said he would “do the best I can to secure this country.”

The Iran issue has risen to the forefront for US voters amid escalating tensions between Washington and Tehran over apparent attacks on oil tankers in the Persian Gulf. But for some candidates, other security priorities took precedence.

Former Vice President Joe Biden and Senator Bernie Sanders, who lead the polls, are scheduled to meet in the second part of the debate on Thursday evening.