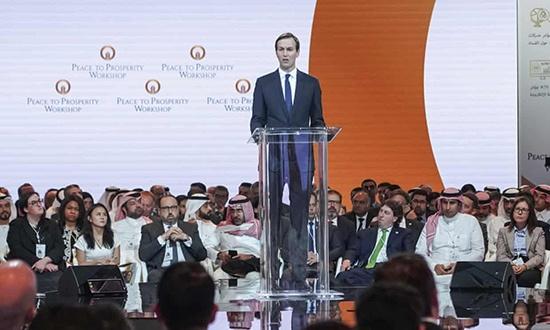 In the end, the ‘deal of the century’ was little more than a failed clearance sale. Jared Kushner arrived in Bahrain touting bedrock principles at untenable discounts. And even then there were no buyers.

The conference that was supposed to offer a new way out of the malaise of the Israel/Palestine conflict provided little of the sort. Its central premise of prosperity as a precursor to a lasting solution barely appeared to register on either side of the separation wall.

In Ramallah and Gaza, there was very little interest in the Trump administration’s proposals. Even in Israel, local media played down the gathering and did nothing to ramp up expectations.

The $50bn (£39bn) pledged, effectively as a start-up fund for the region’s Palestinians, was less than enthusiastically received in Jordan, Egypt and in Lebanon – where leaders in Beirut, not usually inclined to turn away from a $6bn money pot, dismissed the pitch as a shameless bribe.

Economic incentives to integrate Palestinian communities around the region and revitalise the West Bank and Gaza economy were widely viewed as redundant in the glaring absence of a political dimension that could turn such pledges in to realities.

No-one wanted to talk politics in Manama. In the place of a formula that had underwritten peace initiatives for decades came the expectation that the Trump Administration should be trusted to deliver a just and equitable peace, if and when a political dimension comes around.

To say such a demand was a tough sell would be one of the year’s great understatements. The current US administration has been overwhelmingly supportive of the Israeli agenda and openly dismissive of the Palestinians – a fact that led to a boycott of the workshop by Palestinian leaders.

Kushner arrived in Manama as the self-styled envoy who could shake things up, and finally bring traction to a peace process that had gone nowhere in the past decade and had shown real signs of disintegrating.

Casting himself as a disruptor who would find new ways to revitalise a moribund issues, he did indeed make bold moves – all of them in support of Israeli interests to which he is ideologically aligned. Kushner’s one hint of his political stance came when he said the Arab peace initiative, brokered 17 years ago by former monarch King Abdullah, was no longer viable.

That concession brought into question the internationally agreed formula of a two-state solution. While dismissing the Arab initiative as a vehicle for a two-state solution does not mean the latter is dead, critics in Ramallah and across the region were quick to draw that inference.

“Frankly, we demand an independent Palestinian state on the territories occupied by Israel in 1967,” said Ashraf Jabari, chair of the Palestinian Business Network. Hanan Ashrawi, a senior member of the Palestine Liberation Organisation, said of Kushner’s plan: “It is totally divorced from reality. The elephant in the room is the occupation itself.”

Abandoning such a foundational platform would take the conflict into unchartered waters, and be sure to raise the ire of much of the global community. It would also beg the question of what could possibly come next that either side could accept as a viable model.

The Palestinian position ahead of the conference was as weak as it has ever been; the US had withdrawn humanitarian aid funding, shuttered its missions in the West Bank and Gaza, and kicked out its diplomats from Washington. Its economy has stagnated, political structures broken down and the rule of law across the territories continues to be tested.

In short, the Palestinians are in no state to negotiate, even if they were minded to. With Kushner having revealed his hand in Manama, there is now at least more clarity about what to expect for the remainder of this administration.

Now comes the guessing game of just how far the US will go if it gets no buy in to its plan. An Iran-style economic strangulation, a push for regime change or more of the same steadily tightening occupation, with no one in Washington raising a fuss about human rights or deteriorating living conditions.

As the conference wound down, Tony Blair, who bought into the notion of economic growth being a reboot for the Palestinian economy during his time as head of the Quartet a decade ago, stressed to Kushner the need to abide by the principles of two states and for economic and political initiatives to give heft to any plans. He failed to draw a commitment, and the conference ended with a pledge that whatever comes next will be “fair and just” for both sides.

“It’s absolutely foolish to believe you can have economics without sound politics, but it’s likewise completely futile to think politics will work without economics buttressing it,” Blair told the gathering.

There was little reason to take such a claim on face value before the Bahrain summit, and even less so now.