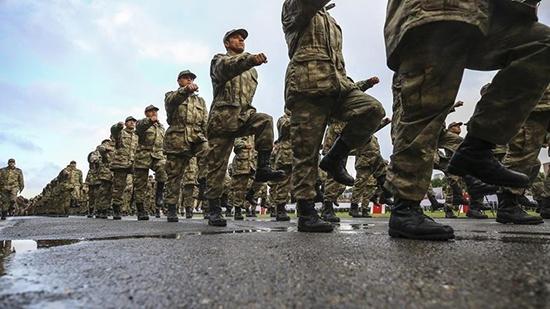 With the new system, the period of conscription is reduced from 12 months to six months for private and non-commissioned soldiers, and at least one month of basic military training is required for all male Turkish citizens.

After completing six months of service, if a conscripted soldier wants to and is suitable for extending his military service, he may do so for an additional six months, in return for a monthly salary of 2,000 Turkish Liras (about $347).

Soldiers who serve another six months in southeastern and eastern provinces, such as Gaziantep, Şırnak and Hakkari, will receive an additional 1,000 Turkish Liras (roughly $174) per month.

Under the new law, male Turkish citizens, over the age of 20, will be required to undergo a one-month-long military training. They can obtain an exemption from the remaining five months of their mandatory service by paying 31,000 Turkish Liras (about $5,380).

The number of conscripted soldiers to parlay to paid military service will be determined by the Defense Ministry according to the Turkish army’s needs.

The president is authorized to alter the duration of mandatory military service, if he deems it necessary, but conscripted service will not be less than six months.

Citizens currently in military service will have the chance for an early discharge.

Over 100,000 soldiers will be discharged now that the new law has been ratified, while some 460,000 men are eligible to pay for an exemption from service.

If necessary conditions are fulfilled, some citizens will be exempted, with the joint decision of the National Security Council (MGK) and the Defense Ministry.

The ruling Justice and Development Party (AKP) introduced the new military service bill on May 23.

Discussions on the bill started in the General Assembly on June 11.

Lawmakers from political parties including the AKP, the Nationalist Movement Party (MHP) and main opposition Republican People’s Party (CHP) kicked off debate on the bill, voicing their concerns and suggestions.

After parliamentary sessions and meetings of political parties with Defense Minister Hulusi Akar were finalized, the bill was ratified on June 25.