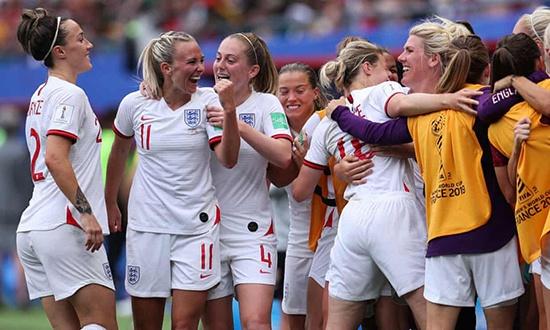 As the Women’s World Cup enters the quarter-final stages, the sound heard across the globe is of records – and prejudices – being joyously shattered.

At the weekend a peak audience of 6.9 million watched England’s match against Cameroon, and there is every expectation that figure will be surpassed on Thursday night when Phil Neville’s side face Norway. With France, Brazil and Italy also enjoying record-breaking TV figures in recent days there is growing sense that women’s football, which has often been marginalised and sneered at, has finally gone mainstream.

The BBC has told the Guardian that three of England’s matches at the Women’s World Cup rank in its top 10 most-watched football games of 2019 – something that would have been unthinkable barely a decade ago – with only Manchester United’s FA Cup ties against Chelsea and Arsenal, and the final between Manchester City and Watford, attracting higher peak audiences.

Even Glastonbury has got in on the act, responding to a plea from England’s 20-year-old midfielder Georgia Stanway to show the Norway game so that her brother can watch it while at the festival.

No wonder that when a Norwegian reporter asked Karen Bardsley whether England was in the midst of a “revolution in women’s football”, the goalkeeper nodded in agreement. “That’s a nice way to put it,” she said, smiling. “We have gone from struggling to get teams in competitions to having massive clubs involved and being full-time professionals.”

Neville also admits he was caught by surprise by the sudden surge in popularity. “When I took the manager’s job 18 months ago I never envisaged we’d be where we are today,” he said. “It’s exploded, really. The World Cup has helped. But you don’t have an explosion without the quality on the field.”

That big bang is being felt globally, too. According to Fifa, France’s match against Brazil at the weekend got the biggest TV audience for a Women’s World Cup match with 35 million watching in Brazil and another 10.6 million in France. There was a similarly uplifting story in the Netherlands, where the victory against Japan on Tuesday was watched by 3.54 million – the fourth-highest TV rating for any sporting event in the country during 2019.

Italy’s manager, Milena Bertolini, has noted the effect that the team’s progress into the quarter-finals has had on attitudes back home. “I know cultural changes take a lot of time, but this team are able to break down some of those prejudices,” she said. “That’s their mission.”

Lynsey Douglas, the women’s sport global lead at Nielsen, which tracks TV audiences, told the Guardian that the boom in viewers in the UK and elsewhere are indicative of a wider trend.

“The audiences for this Women’s World Cup have been breaking records all around the world, with plenty of free to air coverage attracting audiences in the millions,” she said. “And while there are still eight games remaining, we fully expect this to be the most watched women’s tournament in history.”

England go into their quarter-final as warm favourites, given they are ranked third in the world while Norway are outside the top 10. Neville, although his team have not yet completely convinced, is confident they will handle the greater expectations back home. “In the past, you’d probably shield the players from a fear of failure – but my girls don’t have that,” he said. “Three or four years ago we were crying out to get to these levels of attention and visibility. When we get here we’re not going to back off and say it’s a bit nerve-wracking.”

Bardsley, who has been part of the national side since 2005, is convinced that this is by far the strongest England team she has played for. “We’re in a fantastic place,” she said. “We’ve never had more belief. We are the most prepared team, the most resilient team. We know our strengths inside and out. And we have gained and gathered momentum. I’m very excited because we haven’t met our full potential yet.”