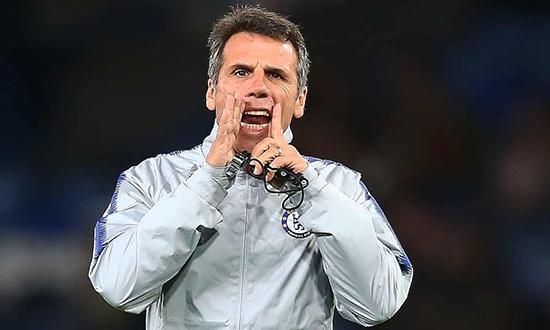 Gianfranco Zola will leave Chelsea this weekend upon the expiry of his contract having turned down the offer of an ambassadorial role at the club and resolved to find work as a manager.

The Italian, who was highly popular as a player and coach at Stamford Bridge, served as the assistant to Maurizio Sarri last season, when the club secured a return to the Champions League with a third-place Premier League finish and won the Europa League.

Sarri has moved to Juventus to succeed Massimiliano Allegri and will be replaced by Frank Lampard, who will bring his own staff to Stamford Bridge.

“Gianfranco’s contract with Chelsea expires at the end of the month,” said Zola’s long-time agent and lawyer, Fulvio Marrucco. “After a season of hard work and fantastic results alongside Maurizio Sarri, he is ready to take the next step in his own management career.”

Zola would be open to remaining in England, and not only because he is extremely anglicised. He has managed West Ham in the Premier League and Watford and Birmingham in the Championship. He showed what he could do in the first two appointments – although it did not work out at Birmingham – and he is keen on the development of young English talent. The 52-year-old would back himself to do well again in the right structure, most likely alongside a technical director.

Chelsea are poised to complete the permanent signing of Real Madrid’s Mateo Kovacic for a fee which could rise to €50m (£44.8m) with add-ons. The Croatian spent last season on loan at Stamford Bridge and as part of that deal is allowed to join the club despite a transfer ban.

Fifa has handed Chelsea a two-window transfer ban, starting this summer, after a lengthy investigation into how they have registered players at their academy over a number of years. Chelsea have denied wrongdoing. The club appealed against the decision to the court of arbitration for sport this month but the ban has not been frozen.

Chelsea signed Christian Pulisic from Borussia Dortmund in January but loaned him back to the Bundesliga club until this summer and Kovacic is ready to join the USA midfielder as Chelsea’s second, and in all likelihood last, purchase before the new season.

Kovacic made 51 appearances for Chelsea last season but failed to score. He joined Real Madrid in 2015 after two years at Internazionale but failed to hold down a regular starting place at the Bernabéu.

Eden Hazard has left Chelsea, joining Real Madrid for an initial £88.5m in a deal that could rise to £130m.