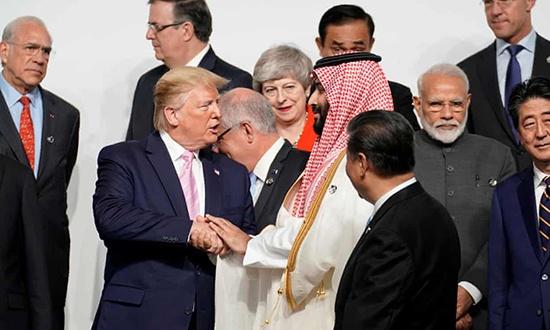 OSAKA, June 29 (Reuters) – President Donald Trump said on Saturday he appreciated Saudi Arabia’s purchase of U.S. military equipment, calling Crown Prince Mohammed bin Salman a “friend of mine” who had worked to open up the country with economic and social reforms.

“I think especially what you’ve done for women and seeing what’s happening – it’s like a revolution in a very positive way,” he added on the sidelines of the Group of 20 (G20) summit.

Trump declined to respond to reporters’ questions on whether he would address the death last year of Saudi journalist Jamal Khashoggi, a critic of MbS. The CIA has determined the prince ordered his killing, but Saudi officials have denied any involvement. (Reporting by Roberta Rampton Writing by Chang-Ran Kim)