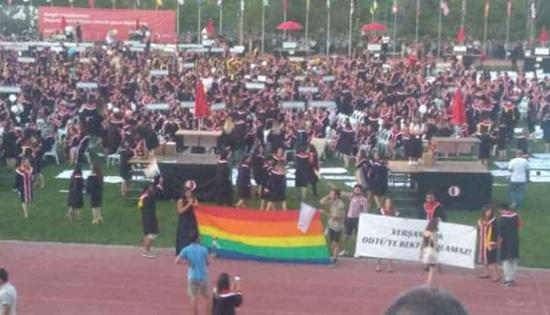 Four students from Middle East Technical University (ODTÜ) were taken into police custody on Sunday, hours before the school’s graduation ceremony, which is usually a venue for criticizing recent political events and government actions, the Diken news website reported.

The students are reportedly leaders of youth organizations at the university.

Last year four students were arrested by an Ankara court for insulting President Recep Tayyip Erdoğan by holding a placard bearing a caricature that was first published in 2006 by the Penguen political satire magazine, titled “Tayyipler Âlemi” (World of Tayyips).

Then-Prime Minister Erdoğan filed a lawsuit against the Penguen magazine; however, an Ankara court dismissed the suit, citing freedom of expression.

The students were released after a month and were subsequently received by President Erdoğan at his palace.