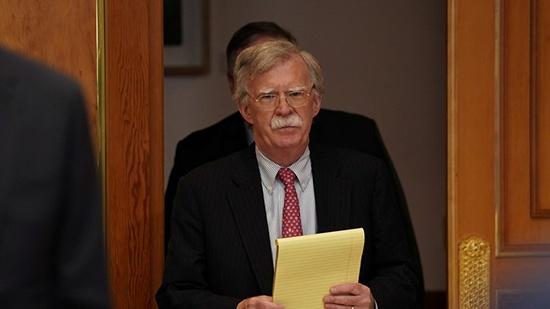 As Trump’s most trusted adviser on all things geopolitical, one would expect John Bolton to have the president’s ear before, during, and after his historic foray across the Demilitarized Zone into North Korea and subsequent meeting with Kim Jong-un. However, Bolton was nowhere to be seen during Sunday’s impromptu summit, and was instead dispatched to Mongolia to talk security with Mongolian State Secretary Davaasuren Damdinsuren.

Delighted to be in Ulaanbaatar & looking forward to meeting with officials to find ways to harness Mongolia’s capabilities in support of our shared economic & security objectives. Thank you for the warm welcome Secretary of State @davaasuren_dpic.twitter.com/AN8T1AHryg

Though Bolton’s trip had apparently been scheduled before the meeting was cobbled together, Twitter was rife with speculation. “Hopefully Bolton’s banishing to Mongolia means that the chi is ready to flow again between Washington and Pyongyang,” wrote Korean peace activist Christine Ahn.

The inter-Korean peace process has stalled because of the breakdown in US-DPRK talks. Hopefully Bolton’s banishing to Mongolia means that the chi is ready to flow again between Washington and Pyongyang. https://t.co/GRjhvFpCzE

I thought that was a metaphor when I first saw this tweet but nope John Bolton was literally in Mongolia https://t.co/HNBXigt8GS

Bolton’s presence would likely have soured the amicable mood in Korea. Pyongyang has described the adviser as “dim sighted,” “human scum,” and a “bloodsucker.” Bolton has also been accused of torpedoing this year’s Hanoi summit between Trump and Kim, by suggesting beforehand that Korean denuclearization could follow the “Libya model” – a model that saw Libyan leader Muammar Gaddafi overthrown and murdered seven years after agreeing to denuclearize.

Rumors of Bolton’s impending sacking from the Trump administration began to circulate.

My read on this is Bolton will be out soon, Pompeo in as NSA and SecState—in true Kissingerian fashion. Bolton was literally removed from Trump’s Koreas visit & sent to Mongolia where he would do far less damage. https://t.co/pPYBCF10lu

You don’t understand. Bolton was sent to Mongolia. He is now out of favor with the WH. Tucker Carlson is sitting in for him and Ms. Ivanka Trump is sitting in for Secretary Pompeo. Keep up. And don’t get attached to any one person.

Such speculation is not new, however, and the DC rumor mill has been buzzing with half-stories of Bolton’s looming departure for several weeks now. Former CIA agent and whistleblower John Kiriakou told RT two weeks ago that Bolton’s head was on the chopping block, as Trump apparently tires of his lobbying for war with Iran. However, Kiriakou noted that his leaving is “definitely not a done deal,” and still the stuff of gossip.

I love Mongolia. I’m sorry that it had to receive John Bolton.

Despite the caveat, recent public statements by Trump have given credence to the rumors. “John Bolton is absolutely a hawk,” the president told reporters last week. “If it was up to him he’d take on the whole world at one time, okay?”

With military confrontation with Iran and Venezuela on the cards last month, Trump described himself as “the one who tempers [Bolton], which is okay.” Days beforehand, Trump had expressed frustration that Bolton was trying to get him “into a war,” at least according to the Washington Post’s sources.

What could John Bolton be doing in Mongolia?

Mongolia is strategically located (between Russia and China). At the same time, it is entirely landlocked. https://t.co/xRcT1d928A

The president also referred to his adviser as “Mike Bolton,” at least twice on Sunday. Verbal tic, or foreshadowing of Secretary of State Mike Pompeo assuming Bolton’s role? Who knows.

How many times can Trump call John Bolton “Mike” Bolton before he quits ?

And where does Tucker Carlson fit into all of this? The Fox host interviewed Trump at the DMZ on Sunday, with the interview due to be broadcast on Monday. While grooming the TV presenter to replace Bolton might be a bit of a reach, Carlson reportedly has Trump’s ear on key issues of national security, and according to one report has been privately advising the president not to go to war with Iran.