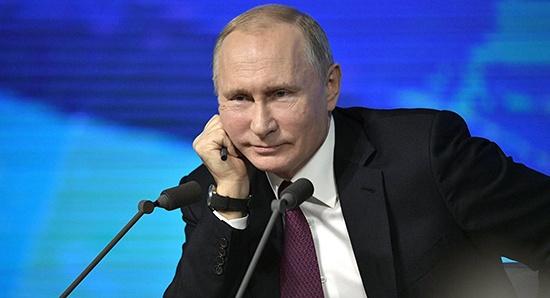 The frontrunner in the race to become the next leader of the Conservative Party and UK prime minister wrote an extensive piece for a British newspaper on Sunday to comment on a recent interview by Russian President Vladimir Putin, who said that liberal ideas were no longer supported by a majority of people in Western nations.

The United Kingdom will show Russian President Vladimir Putin its commitment to liberal values by leaving the European Union by 31 October, UK prime minister hopeful Boris Johnson wrote in his article for The Daily Telegraph.

“If we fail yet again, and especially if we thereby increase the risk that the EU demands another referendum before we have delivered the first, we will make a mockery of democracy. […] If we want to uphold liberal values, we must leave by October 31 – and we will”, Johnson penned in the article, headlined, “We will prove Vladimir Putin wrong by leaving the EU by October 31”.

In his piece, the former foreign secretary was responding to the Russian president saying that liberalism has become obsolete and come into conflict with the interests of the overwhelming majority of people.

According to Johnson, not only is liberalism alive and well, it is also “delivering prosperity on a scale unimaginable to previous generations”.

The bookmakers’ favourite in the race for the keys to No 10. believes that states built on the foundations of liberalism, freedom, equality, and the rule of law will prosper, while the country without these essential building blocks of liberalism “will – eventually – face disaster”.

As Johnson noted, the majority of Brits voted Leave in the 2016 national referendum on EU membership because the 28-member bloc “has begun seriously to undermine that fundamental characteristic of a liberal democracy: that the people should have the power, at elections, to remove those who make the laws”.

According to the former mayor of London, the centralisation of power in Brussels and the lack of transparency in decision-making by the European Union lead to nepotism and corruption that people decided not to tolerate in the United Kingdom.

Johnson is not the only European politician to have publicly reacted to President Putin’s remarks on liberal ideas’ obsoletism: just as his interview was out, President of the European Council Donald Tusk argued that the suggestion that liberalism has outlived its purpose could imply that “freedoms are obsolete, that the rule of law is obsolete and that human rights are obsolete”.

“We are here as Europeans also to firmly and unequivocally defend and promote liberal democracy”, he told reporters ahead of the G20 summit, which was held on 28-29 June in Osaka, Japan, while joking that the jet-lag had allowed him to read the entire interview.

Shortly thereafter, European Commission President Jean-Claude Juncker responded in a playful manner that he had been jetlagged as well, “but this was not a sufficient reason to read the interview”.

Vladimir Putin made his remarks in an interview with the Financial Times before he left for the G20 summit, saying that the liberal idea had “outlived its purpose” because the public had turned against immigration, open borders, and multicultiralism.

“This liberal idea presupposes that nothing needs to be done. That migrants can kill, plunder and rape with impunity because their rights as migrants have to be protected. Every crime must have its punishment. The liberal idea has become obsolete. It has come into conflict with the interests of the overwhelming majority of the population”, he said.

The comments by Johnson come weeks before ballot papers are set to be delivered to the 160,000 Tory members who will decide who will replace Theresa May as PM, starting 22 July, while the next prime minister of the UK is expected to be announced on 23 July. On 20 June, Johnson and British Foreign Secretary Jeremy Hunt secured their places as the final contenders for the Tory leadership.

The next British prime minister will have to deal with the final phase of Brexit, which is supposed to be delivered on 31 October following May’s government’s failure to do it on the initial date – 29 March.