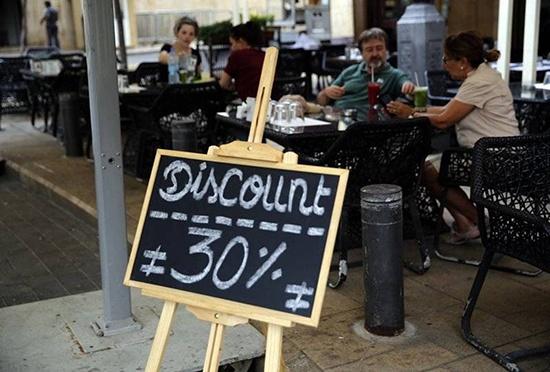 In other words, we’ve lost one equivalent of CEDRE in dollar outflows out of the country in the last year, i.e. in the time it took to form the government and get to work on the (unfinished) budget.

BEIRUT: I recently read an email from one of the largest banks, offering another deal that Warren Buffett would marvel at. The details are such that you receive 10% upfront (tax-free) and 10% annual interest, paid semi-annually. Your money must be locked up for 3 years, with a minimum ticket of $20 million, which must be “fresh funds” (i.e. transferred from outside Lebanon). Excluding taxes, this is equivalent to a compounded annual rate of return of 14.2%.

Traditionally, banks attract deposits and then lend them out at a higher rate. So why is a dollar imported from outside worth more than a dollar already in the country? Is this like local goat cheese versus Camembert? That is a question that every expat offered this phenomenal deal must be contemplating. If he’s able to save enough money to have $20 million in disposable funds lying around, then he must be smart enough to ask himself the obvious question: what are they doing with his money to earn this remarkable rate and what’s the probability he’ll get it back in 3 years?

This same bank offers car loans at 7% or housing loans at 10% (if they even give you one). So that can’t be how they’re earning this unfathomable rate of return. In fact, this type of return generally comes with a private equity or venture capital investment in a google-like startup, and we’re not exactly a world-class incubator. So what is this mysterious lending product they are offering that generates a large enough spread to pay this expat?

The answer is that it’s not a loan product at all, at least nothing you’d ever study in any banking course or MBA. It’s a magic box, like what you’d find in a Harry Potter book, in which all our banks place deposits, and presto, it mysteriously generates money through a patented Lebanese alchemy, which nobody else in the world understands or can replicate. Even Bernie Madoff’s Ponzi Scheme generated a relatively puny average return of 10.6%, with a standard deviation of 2.5% (before he went to jail), while our magic box can generate 14.2% with a standard deviation of 0% (so no apparent volatility or risk).

But these days, we have a problem. The foreign rating agencies and research houses have suddenly caught on to the magic box. They’re looking at it closely, knocking on it with their knuckles, shaking it to see if anything drops out. They’ve also finally realized that our problem isn’t the one that they regurgitate based on their experiences with every other third world country that lived beyond its means for too long (which is why they always prescribe the Aspirin solution). Their solution (copy and paste from every other country with massive fiscal deficits and unsustainable debt) is austerity measures and tax hikes. Our government has tried to implement their recommendations in the latest budget, but it’s not certain if they’re convinced of this prognosis or if they’re just implementing them to appease these foreigners to unlock the $11 billion in CEDRE funds. But even these austerity measures, which started out draconian, have been significantly diluted, after various strikes and lobbying, to a couple of insignificant measures, but still claiming that they’ll reduce the deficit to a mythical 7%, although even if they do, it doesn’t address the real problem, which is the Balance of Payments (BOP) deficit.

For those of you who haven’t read my old articles, the BOP is the calculated amount of every dollar that comes into the country minus every dollar that leaves. Remittances from Lebanese expats (like the recipient of the email) or exports (like selling peaches from Bikfaya or bananas from Damour to the Gulf) are positive. Filling your car with gasoline, or remittances of our domestic workers to the Philippines, or your iPhone, or Lacoste Polo shirt, or traveling to Turkey on vacation, are all negative. The net result of all of them is a negative balance of payments every single month since June of last year. The aggregate amount until the end of April (the last month reported by BDL) was an outflow of $8.6 billion. If we include my estimate of May (which has not been published yet), the total would be around $10 billion. In other words, we’ve lost one equivalent of CEDRE in dollar outflows out of the country in the last year, i.e. in the time it took to form the government and get to work on the (unfinished) budget. Thus, everyone who is pinning such grand hopes on CEDRE doesn’t realize that even if we get every single dollar from CEDRE tomorrow morning, with no strings attached, at best, our financial situation would be back to the sorry state it was last June.

Moody’s just published a report on Lebanon that shows they have a grasp of the problem, which was immediately attacked by a bunch of sycophants, mostly for local consumption, in which they issued silly theories, among the most ludicrous, accusing Moody’s of a conspiracy in order to pressure the country to fall in place with the Deal of the Century.

In the first page, Moody’s stated, “Lebanon’s interest to revenue ratio of 46.9% is the highest of all the sovereigns we rate,” which, in my mind, is a mathematical assessment, sort of like taking a patient’s temperature, and not prone to subjective interpretations. On page 5, the report states that “Lebanon is the last country in the Eastern Mediterranean to explore its hydrocarbon reserves,” which is consistent with our own experience of our leadership’s performance and competence in other areas, like not providing 24-hour electricity 30 years after the end of our civil war.

On pages 8-9, the report states, “The BdL’s domestic debt holdings expanded to more than 50% as of March 2019 (equivalent to $27 billion) … Although the BdL sterilizes these interventions by issuing certificates of deposit, we view the practice of effective debt monetization as detrimental to the goal of preserving exchange-rate stability … The operations also come at the cost of reduced foreign liquidity and increased maturity mismatches in the banking system as its net foreign liability position deteriorates, and involve costs of carry at the central bank (the difference between interest earned on domestic T-bill holdings and interest to be paid to banks on their certificates of deposit)”

This is all basically PhD-speak for “we are screwed if we continue on this path.” More precisely, Moody’s is saying that these operations, intended to protect the currency, are actually threatening both the peg and the banking sector. While I don’t agree with Moody’s that these financial engineering transactions threaten the peg, I do agree with them that they’re doing something much more dangerous. They’re transforming the composition of our debt from primarily Lira, a currency we can print, to dollars, which we can’t, thus threatening our banking system and, specifically, its ability to pay back its dollar deposits in full.

On page 17, the report continues, “In view of the high yields demanded in international capital markets, the BdL has absorbed $2.65 billion in maturing Eurobonds via its foreign-exchange reserves since November 2018, reducing its foreign-exchange reserve holdings to $31.5 billion as of April 2019 from $34.6 billion at the end of October 2018.” Again, this is PhD-speak for saying that foreigners are no longer lending us money and the central bank reserves are now being consumed.

This brings us back to the purpose of the email. Obviously, behind this email is another offer, from the magic box to the bank, in return for attracting overseas dollars, because dollars in-country are at an acute shortage. This reminds me of a city at war and under siege from overwhelming forces, trying to survive until reinforcements arrive, but the question is what are these reinforcements that we’re waiting on?