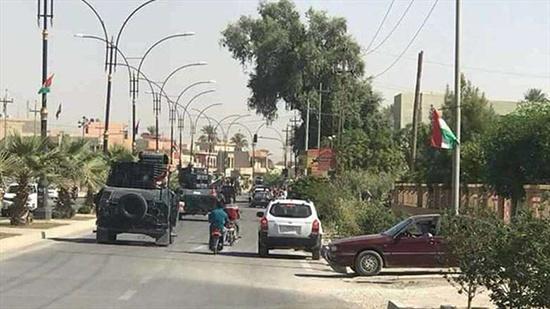 Hiwa Shilani-ERBIL (Kurdistan 24) – The threat of the so-called Islamic State in the disputed district of Khanaqin is reaching a critical point, with at least five separate attacks in the area over the past week, a Peshmerga commander warned on Sunday.

Jamhur Rostam, a Peshmerga commander in the area, said the terror group’s activity has increased in Khanaqin, noting that it indicates the Islamic State may be reorganizing to launch more consistent attacks.

“The security gap in Khanaqin and its surrounding villages has led to the evacuation of 20 Kurdish villages,” Rostam told Kurdistan 24. This shows that the Iraqi forces “are incapable of ensuring the security of the people who live there.”

Despite Iraqi and Kurdish security forces – supported by the US-led coalition – having fought side by side in the years leading up to the Islamic State’s defeat in Iraq, the Peshmerga were forced to withdraw from disputed territories in October 2017 following an attack by Iranian-backed Shia militias and Iraqi troops.

The assault, orchestrated in response to the Kurdistan Region’s independence referendum, led to a breakdown of cooperation between the two security units.

Amanj Razaq, a Patriotic Union of Kurdistan (PUK) representative in the Jabara sub-district, said the Kurdish people who live in the disputed areas “have suffered the most” following the 2017 events.

“Continuous ISIS activity in the area is targeting the Kurdish villages, resulting in the evacuation of 20 villages, and the risk of more people being displaced in the remaining areas as the security breach remains,” Razaq told Kurdistan 24.

He called for a robust and united representation of Kurdish politicians in Baghdad to enable Peshmerga forces to fill the security gap in coordination with Iraqi troops in Khanaqin and other disputed areas.

Iraqi forces announced the liberation of the region from the Islamic State in October 2017. However, since then, the terror group has continuously launched insurgency attacks in the area, with Kurdish officials repeatedly warning of the group’s possible resurgence, similar to the pre-Mosul occupation in 2014.