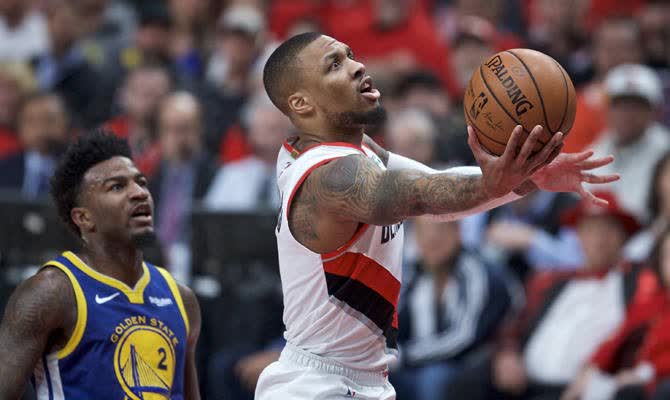 Damian Lillard wasn’t a top-five pick. Tobias Harris wasn’t a lottery pick. Khris Middleton wasn’t even a first-rounder.
Their bank balances won’t know the difference soon.
Free agency opened Sunday with more than $2 billion in deals getting struck in the opening hours — and that’s even without Kyrie Irving officially joining Brooklyn, as has been expected, or any word from Kawhi Leonard about his future plans to either stay with NBA champion Toronto or move elsewhere.
Lillard agreed to a $196 million, four-year extension with Portland that will kick in for the 2021-22 season. Harris is staying in Philadelphia for $180 million over the next five years and Middleton gave Milwaukee a bit of a discount in agreeing to a $178 million, five-year deal — $12 million shy of what he could have commanded.
Even injuries couldn’t derail the spending.
Kevin Durant announced that he’s leaving Golden State and joining Brooklyn on a $164 million, four-year deal — even though he’ll miss next season with an Achilles injury and could have gotten $221 million for five years from the Warriors. And Kristaps Porzingis, who hasn’t appeared in an NBA game since Feb. 6, 2018 because of a knee injury, will sign a $158 million, five-year contract to stay with Dallas.
All deals were confirmed to The Associated Press by people with direct knowledge of the agreements, all speaking on condition of anonymity because the NBA moratorium prevents new contracts from being signed until noon Eastern time on Saturday.
“From the trade to the Sixers in February, through the regular season and playoffs and now on to free agency, this contract is a culmination of so much in my life and basketball career,” Harris wrote in an essay published on ESPN.com. “It’s also a new beginning.”
There were a lot of new beginnings Sunday.
Jimmy Butler agreed to a four-year, $142 million deal that will send him to Miami. Butler — a close friend of retired Miami guard Dwyane Wade — made clear to the Heat that he wanted to be in Miami, and over the next three hours the basic framework of a trade was worked out. Miami is sending Josh Richardson to Philadelphia and Goran Dragic to Dallas to make the Butler move happen.
Irving and Leonard remained on the market, at least technically in Irving’s case, after the initial flurry of free agency — and even with their deals still not closed, nine players agreed to contracts that will be worth $100 million or more. Lillard, Harris, Middleton, Durant, Porzingis, Butler, Kemba Walker ($141 million, four-year deal with Boston), Al Horford ($109 million, four years from Philadelphia) and Nikola Vucevic ($100 million, four years with Orlando) were the big early winners, with more likely to come.
The 76ers moved quickly to add Horford, once the parameters of the Butler trade to Miami were complete.
Point guards did particularly well, and will likely keep doing well.
Lillard, Irving (when he gets his $141 million for four years from Brooklyn, as expected) and Walker guaranteed themselves nearly a half-billion dollars. Terry Rozier left Boston for Charlotte — essentially the swap for Walker — on what will be a $58 million, three-year deal that will be completed via trade. Ricky Rubio also cashed in, getting $51 million for three years from the Phoenix Suns and restricted free agent D’Angelo Russell was believed to be a target for both Minnesota and the Los Angeles Lakers.
Meanwhile, the Leonard watch continued with no hints from his camp. The NBA Finals MVP and now two-time champion will meet with the Raptors in the coming days, Toronto coach Nick Nurse said.
Nurse didn’t say where the Raptors will be seeing Leonard, but said the NBA champs believe they “have a really good chance” to keep him.
“I think he had a tremendous year,” Nurse said at an event in Jefferson, Iowa, near his hometown. “I think it’s a great place. You guys can see our fans and ownership is great. Our front office leadership is great, his teammates. You know, everything went well for him to re-sign. And probably mostly, on top of that, would be his health. He was a guy that missed a whole season, and he had a good, healthy year and played his best basketball in the playoffs.”
In other key deals Sunday:
— Indiana is set to acquire 2017 rookie of the year Malcolm Brogdon from Milwaukee and sign the shooting guard to a four-year, $85 million deal.
— Harrison Barnes, as expected, is remaining in Sacramento on what will be a four-year, $85 million contract.
— The Pacers lost forward Bojan Bogdanovic to the Utah Jazz, which agreed to pay the forward $73.1 million over the next four years.
— New York, with Knicks fans hoping for a shot at Durant, is signing Julius Randle to a $63 million deal.
— Former NBA MVP Derrick Rose will sign a two-year, $15 million contract with the Detroit Pistons.
— San Antonio kept Rudy Gay on a two-year, $32 million deal, and added veteran forward DeMarre Carroll on a two-year, $12 million deal.
___
AP Sports Writer Luke Meredith contributed to this report.
___
More AP NBA: https://apnews.com/NBA and https://twitter.com/AP_Sports