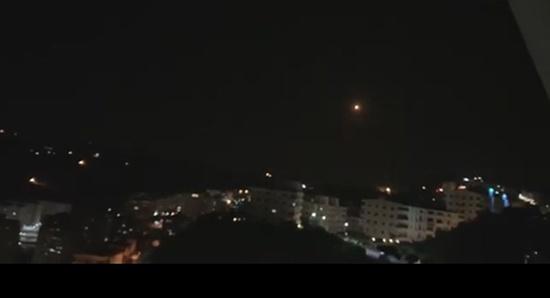 Syria’s state news agency has said that Syrian air defences shot down several missiles over Damascus amid multiple reports of loud explosions in the area.

Syrian air defences have responded to missile attacks in the vicinity of the Syrian capital of Damascus as well as Homs and managed to down a number of rockets, the Syrian Arab News Agency reported.

A correspondent from the scene also reported that a series of powerful blasts had rocked the skies over Damascus.

According to a Syrian military source, the missile attacks were carried out by the Israeli Air Force. There was no immediate confirmation on that matter from Israel.

“The Syrian Air Defence Force repelled the attack of missiles launched by Israeli military aircraft from Lebanese airspace in the direction of our military positions in Homs and near Damascus”, the source said.

The attack resulted in four people being killed, while 21 more were wounded, local media reported on Monday.

Lebanese TV-channel Al-Mayadeen, meanwhile, has reported that explosions also heard on the Syria-Lebanon border, correspond in time with Israeli aviation’s low-altitude flights in the south of Lebanon.

Later, a source at Beirut International Airport also said that the attack had been conducted by the Israeli military from Lebanon.

“We observed that before the attack on Syria ten or more Israeli military aircraft entered the airspace”, the source said.

Tel Aviv has previously admitted to carrying out “hundreds” of air attacks against Syria in recent years, and said that the strikes are aimed at countering an alleged Iranian and Iranian-linked presence in the war-torn country. Damascus has condemned the attacks as a blatant violation of international law. Iran has said that its presence in Syria has been limited to helping Damascus fight Daesh (ISIS)*, al-Qaeda,* and other terrorist groups.