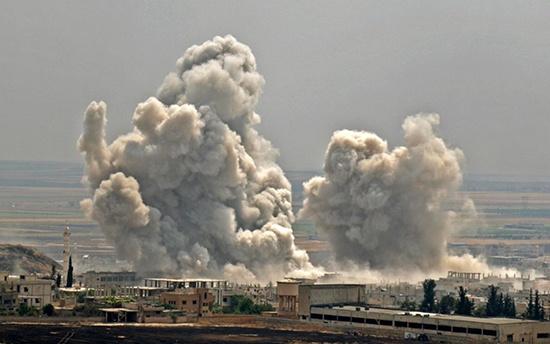 The international community has abandoned Ankara in its efforts to prevent a humanitarian catastrophe in the rebel-held Syrian province.

Despite UN warnings about the potential for the worst humanitarian tragedy this century, the situation in Idlib has escalated – not only because of intensive air strikes by Russia and the Syrian regime, but also due to the reluctance of the international community to intervene.

Turkey is trying to prevent this potential humanitarian disaster, while simultaneously struggling with Moscow, Damascus and Tehran over their differing visions for the future of Idlib. As the Turkish-Russian de-escalation agreement is being violated, the Assad regime’s advances on the ground – backed by Russian airpower – will ultimately fuel a deep humanitarian and political crisis.

An estimated 200,000 people in and around Idlib were displaced in the first two weeks of May, with most heading further north towards the Turkish border. In response, Turkey has given assistance to the rebels in Idlib, in hopes of repelling the attacks. Ankara seems alone, however, in this effort to prevent a humanitarian catastrophe that could affect millions of civilians.

The current situation in Idlib is the result of a slow, but constant process that has unfolded since the beginning of the Syrian war. Far from the days of the “Friends of Syria”, only Turkey is still providing genuine support to the Syrian opposition.

Turkish policies in Syria are embedded in its partnership with the opposition, and as the biggest host for Syrian refugees, it cannot look away from this conflict. Ankara has chosen to take an active role in Idlib, responding to Russian-led attacks by supplying rebels with guided anti-tank missiles to boost the costs for Moscow and force it back to the table.

This irresponsible approach has weakened Turkey’s hand to gather international backing against Russia, Iran and the regime in Idlib

Turkey has been awaiting the help of the international community, but other actors – including the US, and European and Gulf countries – have other interests and agendas.

The Assad regime has systematically bombed Idlib in order to recapture it, in line with its policy to retake “every inch” of Syria. The Assad regime believes that if there is a real ceasefire agreement in Idlib, it will lose the opportunity to launch a major military operation.

Russia, meanwhile, is enforcing its terms in Syria by military means, using its air superiority and the disinterest of the international community to pressure Turkey and enforce its own understanding of a political transition process.

The US has sidelined itself by abandoning the Syrian opposition, ending its funding and support for them and solely relying on the YPG-dominated Syrian Democratic Forces. The Pentagon’s train and equip programme had focused only on defeating the Islamic State (IS). These dynamics have resulted in the sidelining of the US from the Syrian war.

The US had wanted its anti-IS partners not to confront the Assad regime, but it now wants to change the “behaviour” of the regime and force Iran out of Syria. To do this, however, the US would have to boost the Syrian opposition in Idlib.

In Idlib, the Americans are concerned about the dominant role of Hayat Tahrir al-Sham (HTS), formerly affiliated with al-Qaeda, and have called the region the “largest al-Qaeda safe haven since 9/11”. Ignoring the devastating Russian air campaign against civilians, the US appears to care only about chemical weapons.

Since the beginning of the Syrian war, European countries have been operating in lockstep with the US, and have avoided taking strategic responsibility in Idlib. They do not want a new humanitarian disaster and refugee flow towards Europe, but they are also not ready to take bigger steps, beyond humanitarian assistance and support for Turkish diplomatic efforts.

Gulf countries have a different perspective, viewing the Syrian conflict as a zero-sum geopolitical game, in which undermining Turkey’s role is perceived as the best strategy. For Saudi Arabia and the UAE, the situation in Idlib is a way to harm the Turks; with the ongoing embargo on Qatar and Turkish support to Doha, Saudi Arabia and its allies are looking to constrain Turkey.

The Saudis are punishing Turkey by stopping their weapons supplies to the Syrian opposition – most imporantly, TOW anti-tank guided missiles. By restarting the TOW supply programme, Saudi Arabia and the US could increase the costs of a ground war for the regime and force it to the negotiating table.

At the same time, the Syrian opposition has a huge PR problem, boosted by the dominant role of HTS in Idlib. Turkey has to take an assertive stand vis-a-vis Idlib to secure its own national security, but many countries simply do not sympathise with the Syrian opposition, and do not want to risk supplies going into the hands of radicals in Idlib.

The Syrian opposition has driven itself into this catastrophic situation by failing to eliminate radical groups in their areas of control.

Many opposition members believed that the radicals were good fighters against the regime, preferring the short-term benefits of shock troops over essential international support. This irresponsible approach has weakened Turkey’s hand to gather international backing against Russia, Iran and the regime in Idlib.