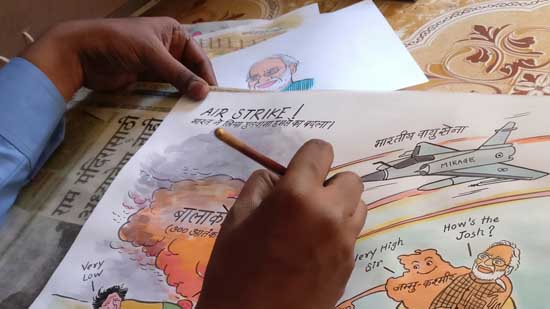 With political correctness increasingly encroaching on the right to free speech and calls for censorship of ‘offensive’ opinions on the rise, there are signs that political cartoons and satire could be next on the chopping block.

Canadian cartoonist Michael de Adder has claimed that his contract was terminated after 17 years last week by a New Brunswick publishing company – the day after one of his cartoons critical of US President Donald Trump went viral online.

The cartoon in question was inspired by the image of a dead migrant child and her father washed up on the banks of the Rio Grande last week, having drowned while attempting to cross and seek asylum in the US. The illustration depicts the man and girl lying face down in the river as Trump stands beside them with a golf club in hand, saying, “Do you mind if I play through?”

In an epic-length tweetstorm, de Adder, a popular cartoonist in Canada, explained that every cartoon critical of Trump that he had submitted in the past year had been “systematically axed.” In another tweet, he linked the decision to the fact that New Brunswick Premier Blaine Higgs is a former executive of Irving Oil – and the Irving family has a virtual monopoly on media in the province.

“It got to the point where I didn’t submit any Donald Trump cartoons for fear that I might be fired,” de Adder wrote, in another tweet.

Brunswick News Inc. claimed in a statement that linking the cartoonist’s termination to his Trump cartoon was a “false narrative” and said that they had been planning for some time to bring back another “reader favorite” long before the golf cart cartoon was published.

But Jeffrey Dvorkin, who heads the University of Toronto’s journalism program, told Vancouver’s CityNews that de Adder’s firing seemed to be part of a trend among newspapers of cutting cartoons due to digital age worries about not wanting to “annoy” any of their readers.

“The goal is to aggregate but not annoy audiences,” Dvorkin said, explaining that satire seems to be the latest target.

It’s a trend that has been building for a long time. A 2012 study by the Herb Block Foundation noted that fewer than 40cartoonists were employed as staff by US newspapers that year – down from 2,000 at the beginning of the 20th century and continuing to shrink.

Political cartoons are supposed to be sharp, thought-provoking and cut to the heart of an issue in a way that a longer, written editorial can’t – but it looks as if newspapers are starting to see less value in the tradition of publishing biting cartoons which push boundaries and use humor to provoke reaction.

Earlier this month, the New York Times announced it was cutting all political cartoons after facing backlash when an illustration published on its pages caused uproar and sparked accusations of “anti-Semitism.”

One Times cartoonist, Pat Chappatte, who lost his job (despite not being responsible for the offending cartoon) tweeted at the time that media organizations needed to stop “being afraid of the angry mob.”

“The most outraged voices tend to define the conversation, and the angry crowd follows in,” Chappatte wrote in a blog post on the Times’ decision. Responding to de Adder’s termination on Twitter on Sunday, Chappatte wrote that these are “worrisome signs for journalism, satire and democracy.”

De Adder and the New York Times columnists certainly were not the first and they won’t be the last as media organizations increasingly cave in to the whims of online outrage mobs and allow corporate ownership get in the way of editorial decision making.