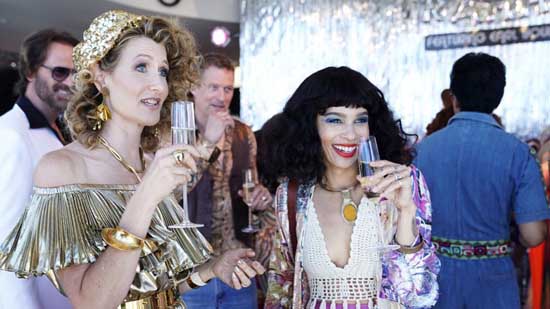 In the fourth episode of its new season, the HBO series explores the rifts in its characters’ unions—and the feasibility of forgiveness.

Early in Sunday evening’s episode of Big Little Lies, Madeline (Reese Witherspoon) smokes a cigarette with all the finesse of a teenager cutting class for the first time. Lounging affectedly on her back deck with Jane (Shailene Woodley) and Renata (Laura Dern), Madeline is unprepared for the accidental blow that escapes her friend’s lips. Referencing the financial crisis her husband has plunged them into, Renata offers a pragmatic assessment of marriage: “They betray us and we stay, you know. They lie, they cheat on us, and we s—,” she muses, cutting herself off when she realizes she’s struck a nerve. Madeline, whose infidelity to her husband Ed had recently come to light, storms back into the house.

Big Little Lies has always shined when excavating secrets in the domestic sphere. This season, with Perry Wright’s shadowy death serving as a catalyst for the other characters’ erratic behavior, the show has smartly dedicated much of its run time to exploring the Monterey Five’s strained relationships. Sunday night’s episode, in particular, emphasized a salient truth about marriage: Maintaining such a bond is difficult work that stretches beyond the two people at its center. The labor is at once collective and deeply personal.

In Renata’s marriage, for instance, workplace gains are not enough to compensate for a spousal betrayal. Though prior episodes had seen Renata having meltdowns at the prospect of her husband’s financial malfeasance leading them to social humiliation, Sunday night’s reveals a more immediate loss. She’s forced to hand over her wedding ring during a bankruptcy hearing; the clunky jewelry slides across the table, taking the last of Renata’s resilience with it. Though she never participated in Gordon’s schemes, Renata’s marriage to him renders her property collateral damage in his crimes.

As she faces this massive upheaval, Big Little Lies conveys the futility of Renata’s attempts to cling to an identity outside the one she shares with her husband. At the bankruptcy hearing, her multiple assets having already been claimed, she reminds the trustee that she does not stand to inherit any wealth from her family—she’s self-made. It’s a cruel irony: Renata, who labored tirelessly to accrue massive gains in a male-dominated industry, sees her livelihood jeopardized by the one man who was supposed to help her build it.

Later, in one of the episode’s most affecting scenes, Gordon approaches Renata with a half-hearted request for forgiveness at their daughter Amabella’s disco-themed party. In response, Renata laments that this is the last lavish function they’ll ever be able to host for their child. It’s a frivolous-seeming concern, to be sure, but for Renata it’s a kind of undoing:

Since I was old enough to dream of having my own family, I’ve been in my head planning my child’s life, what it would entail, what she would have, the opportunities I could give her. So I’m having a difficult time reconciling that all my dreams have gone to shit. All my hopes and plans for Amabella have gone to shit. I married a man who would take my life and all my accomplishments and just turn them to shit. That—that’s on me right? My choices. My stupidity. It’s my picker that’s broken. My fucking bad.

Though Renata’s histrionics and ostentatiousness have made her one of the show’s most entertaining characters, she’s rarely among the most sympathetic. She is brash, demanding, and ruthlessly ambitious. But in depicting how quickly Gordon’s choices have brought her life crashing down—and how inextricably tied the two are by virtue of California law—Big Little Lies sows empathy for the sometimes frustrating character.

The question the show asks via Renata’s arc is also one Madeline and Ed continue to wrestle with: How much transgression can one marriage forgive? Ed, who had played the role of the sensitive husband throughout Season 1, has become a walking bundle of passive aggression. In a rare moment of conflict, he asks Madeline why she didn’t approach him with concerns about their marriage instead of having an affair: “You know, there’s never any middle ground with you. Like when you’re upset, it’s charge, full speed ahead. If there’s a problem, charge. If there was a problem with us, where was the … charge?” he asks.

Madeline’s response is self-aware, but unsatisfying to him: “There wasn’t a problem with us, Ed. There’s a problem with me.” Their daughter, Chloe, has noticed the problem with Madeline, too. For a homework assignment about pairing opposites, Chloe contrasts a picture of Madeline with a drawing of a door. The door is hinged, she explains; her  mother is not. That Madeline would act out in her marriage registers to Ed, to their couples therapist, and to Chloe as a sign of a deeper dissatisfaction.

When Ed dances giddily with Bonnie (Zoë Kravitz) at the party later, it’s enough to send Madeline reeling—especially because he’s rebuffed her attempts to be affectionate. Bonnie, meanwhile, faces her own marital disconnect this season. Following the death of Perry and the lie she agreed to tell about it, Bonnie became estranged from her husband, Nathan (James Tupper), who in turn—in a desperate attempt to bridge the distance between them—had called Bonnie’s mother, Elizabeth, to visit.

The relationship between Nathan and Bonnie’s mother (Crystal Fox) is an icy one; she finds him “ill-equipped to connect with [his] wife,” and doesn’t hesitate to say as much. In navigating her mother’s arrival, Bonnie must attempt to correct rifts between Nathan and herself. The stakes are both immediate and intergenerational: Is she doomed to replicate the chasms that clearly exist between her parents, a free-spirited black woman and a comparatively uptight white man? Again, Big Little Lies questions its characters’ inheritances.

Perhaps most distressingly, the sustained, unwelcome presence of Mary Louise (Meryl Streep), Perry’s mother, keeps Celeste tethered to her late husband. Mary Louise insists that Celeste relitigate her marriage to Perry. After Celeste admonishes her for moving into the same residential building as Jane, Perry’s rape victim, Mary Louise implies that Celeste must have been an inattentive partner to Perry: “There are many questions that I still have. For instance, why was he even with her that night? What was he looking for, perhaps seeking refuge from?” After Celeste balks, Mary Louise doubles down: “How many other women did he go to? If there’s one, there are others.”

The encounter ends with a shocking physical breach, one of the season’s most thrilling moments. But the show also introduces a new layer to Mary Louise’s fixation on Celeste and how she parents the twins following Perry’s death: After Perry’s brother died (in a mysterious car accident that still has yet to be fully explained), Mary Louise’s husband left her alone with Perry and with her own grief. That Mary Louise is now fighting, however reprehensibly, to protect her two grandsons after having lost her own two boys is understandable if also jarring.

The core of Mary Louise’s judgment of Celeste seems rooted in the latter’s apparent distance—from the boys, from Mary Louise, and, more and more, from Perry. In her constant critiques of Celeste, Mary Louise acts as a surrogate for her son. She also seems to espouse a retrograde assessment of marriage: You stay, no matter what. The revelation of Big Little Lies remains how thoroughly it complicates that premise.