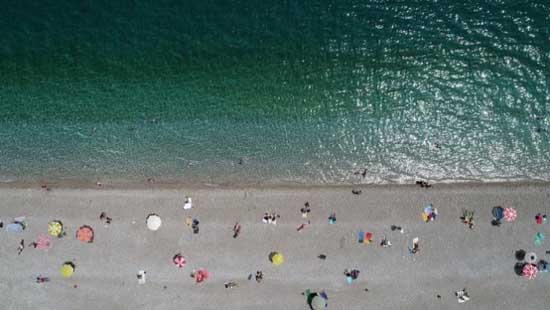 The municipal council of the Gazipaşa Municipality in the popular Turkish tourist resort of Antalya has voted to continue to allow Syrian refugees access to public beaches, in a reversal of a previous vote in which the council had banned them from the beaches, the T24 news website reported on Monday.

In a controversial move last month, the municipal council of the Gazipaşa Municipality with a majority vote decided to ban Syrians from public beaches in the district and ruled that Syrians can only swim in areas designated by the police.

The council had to review its decision after the district’s mayor, Mehmet Ali Yılmaz, who is from the ranks of the main opposition Republican People’s Party (CHP), refused to sign on to it and sent it back to the council, saying that it contravenes the law.

In the new vote seven members of the council from the İYİ (Good) Party voted in favor of banning Syrian refugees from public beaches, while the Justice and Development Party (AKP), CHP and Nationalist Movement Party (MHP) members voted against it.

There are more than 3.5 million Syrian refugees in Turkey who have been granted temporary protection status. Turkey hosts more of them than any other country in the world.

There are frequent news reports about discriminatory practices against the Syrian refugees in Turkey as many Turks are uneasy over their presence.