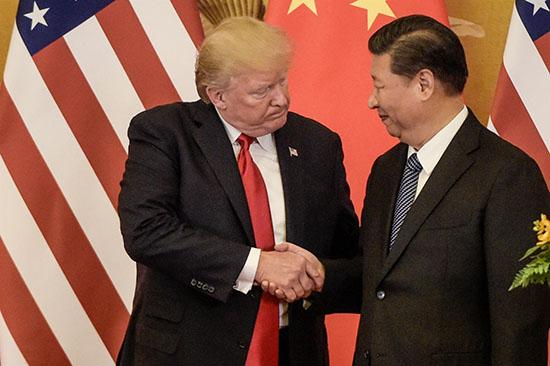 Stock markets around the world have rallied sharply as hopes of a peace deal in the US-China trade war rise.

Shares on Wall Street hit intraday highs on Monday after Donald Trump and the Chinese president, Xi Jinping, agreed to resume trade negotiations following a meeting at the G20 gathering of world leaders in Japan at the weekend.

The Dow Jones industrial average jumped almost 200 points in afternoon trading in New York, an intraday record, before closing up 117 points at 26,717. The wider S&P 500 index of major American firms closed at a record high of 2964.

Trump said over the weekend that the meeting with Xi had been “excellent” and that the relationship with China was “right back on track”. The president promised there would be no additional tariffs on Chinese imports for now – a key concern among investors. China also agreed to hold back from imposing tariffs and will purchase more US agricultural products.

The long-running trade dispute between the US and China has served as a handbrake on the global economy over recent months, dragging down factory output as international imports and exports dwindle. Trump has slapped import tariffs on $200bn (£158.1bn) of Chinese goods, while China has retaliated with higher taxes on US imports worth $60bn.

Mark Haefele, the global chief investment officer at the Swiss investment bank UBS, said the truce would likely be prolonged as an escalating trade conflict would cause damage for Washington and Beijing.

“[It] could slow US growth ahead of next year’s presidential election and potentially reduce President Trump’s chances for re-election. China will also be keen to avoid further curbs by the US that could slow the development of its technology industry,” he said.