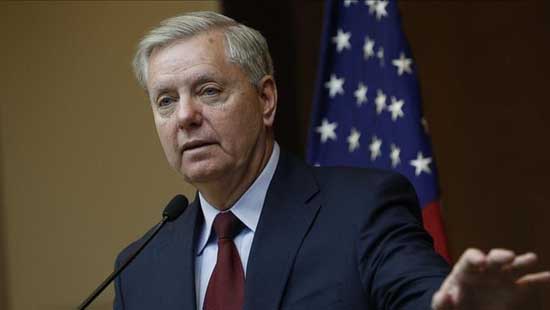 A senior U.S. Republican senator on June 30 said sanctions would be “required under law” if Turkey “activates” the S-400 air defense systems bought from Russia, adding that he wanted to avoid a potential conflict with a NATO ally.

During an interview with CBS News, Lindsey Graham said the Senate recently passed legislation banning the sale of F-35 stealth fighter jets to Turkey if they activate the Russian S-400 missile battery.

Since 2017, Turkey and the U.S. have been at odds over Turkey‘s decision to buy the S-400, a Russian-made missile defense system, and U.S. threats to break its contract to sell TurkeyF-35 jets over the dispute.

Despite threats from American officials for Turkey to abandon its deal with Russia, Turkish officials have described the transaction as a “done deal.”

“There’s no way we’re going to transfer to Turkey the F-35 technology and let them buy a Russian missile battery at the same time. It would compromise our platform,” said Graham, who was in Turkey for a visit to the U.S. Embassy in Ankara at the time of the interview.

However, Graham also stressed the importance of Turkey as a strategic NATO ally and urged the two countries “to find a way out of this dilemma.”

“They’ve [Turkey] helped us in Syria. They’re a NATO ally, President Trump’s right that the last administration probably was too hard. They should have sold them the Patriot U.S. missile battery to protect Turkish airspace,” Graham said.

“The way around this is to get Turkey to back off activating the S-400, replace it with a Patriot missile battery that is NATO compliant. I don’t want a conflict with Turkey. They’re a very important ally, particularly when it comes to Syria and the region,” he added.